In celebration of their 25th anniversary Irish rockers Ash have released a 22 song retrospective of the bands career thus far. “Teenage Wildlife: 25 Years of Ash” was compiled by the band themselves and features various songs from the groups eight studio albums along with one newly released track titled “Darkest Hour of the Night”. Since debuting in 1994 the band which has consisted of Tim Wheeler, Mark Hamilton, Rick McMurray and Charlotte Hatherley have turned out a catchy stream of garage/alternative rock earning them praises and recognition from all over the globe.

Having first heard of Ash back in the late 90’s amidst bands like Pavement, Blur and Weezer I never really got into the band aside from the songs “Kung Fu” and “Jack Names the Planets” which were featured in a couple popular movies from that time. Thankfully now with the release of “Teenage Wildlife: 25 Years of Ash” I was able to go back and discover some really great songs I inadvertently skipped over during their initial release. Tracks like “Girl From Mars”, “Burn Baby Burn” and “Shining Light” we definite highlights that had me reminiscing about my late teen years. Being this release was compiled by the band themselves it gave the album a more person feel as knowing that this wasn’t just another stock label compilation gave it extra value along with some great songs that may otherwise have been over looked without the bands input.

The 2 LP set that we checked out had really great packaging which was printed on high quality card stock and included heavy weight sleeves for each record that featured additional photos and stories from the each era of the band. Though no remastering/mixing was noted each song had a bright mix which really stood out and the inclusion of the band’s latest single “Darkest hour of the Night” was a solid choice giving fans just a taste of the bands latest works. Available in a variety of formats including limited edition lenticular vinyl and a special 3 CD that includes an 18 track rarities CD. Needless to say there are plenty of ways to get your hands on this and we strongly encourage you to do so as “Teenage Wildlife: 25 Years of Ash” is a fresh breath of nostalgia that has been long overdue.

3.) Darkest Hour of the Night

Will Ash is the lead guitarist for the Los Angeles based metal band The Crown Remnant. The five piece band which also includes vocalist Geordy Shallan, guitarist Jorge Lopez, bass guitarist Josue Lara and drummer Art Ramirez is set to release a brand new album on January 18th titled “The Wicked King: Part II”. Media Mikes had the chance to speak with Will recently about the albums concept, its creation and what the band has planned for the New Year.

Adam Lawton: Give us a little background on the band if you could?

Will Ash: Los Angeles is kind of a funny place. Everyone has their own things going on so you tend to explore a lot of different avenues when you are trying to be creative out here. I think we are lucky in this band as we have a bunch of guys who are all adventurous enough to want to try a number of different things such as theater, comedy, stunt work and pod-casting. Being that we all come from these different areas of entertainment we are able to use those different experiences to help us create this music. The band sort of started when our singer Geordy came into where I teach guitar lessons. We started talking and had some of the same ideas. He and I coming together kind of solidified the start of The Crown Remnant. The name was already in place and everything so from there we started to audition people. We reached out via Facebook and a bunch of other avenues to get the lineup that we have now.

AL: The new album is titled “The Wicked King: Part II”. Can you tell us about that and how you built on the concept established from the first record?

WA: This was a good creative experience. I like music that is thematic and records that keep a theme throughout the individual tracks. We actually wrote part 1 and part 2 in tandem with one another. We started with a very wide perspective. We knew we wanted an album that was cohesive from the first track all the way to the last track. From there we chose to do a split release. Part 2 is the answer to the call sounded by part 1. The first record has a brighter more idealistic approach and this new album is the antithesis of that. It’s a little crazier, a bit darker and somewhat bigger.

AL: With both records being written at the same time how did you decide what songs went where?

WA: That was a question that went through all of our brains for quite some time. Initially we were very starry eyed and wanted a full 13 track release. The more we thought about it the more saw the benefits two releases could bring. We wanted to keep things consumable so the decision to do two releases was really the first decision we made. From there it was just a question of what songs were going to make it into the records. We looked at the concepts and ideas of each song to see where they would best fit. Geordy and I do a lot of writing together and each of our writings comes out in a certain way. I think that was a big help also when it came time to split things up.

AL: You also score music for video games. How did the writing of this record compare or contrast to that of your game work?

WA: I love video games! It does end up being a little different. I get very excited when I have the chance to mix in more orchestral pieces with the type of music we play in this band. I am very much in to symphonic music so to be able combine these styles is very enjoyable. When I sit down and work on game pieces I am looking a whole different set up instrumentation. Fundamentally things are the same when it comes to writing however beyond the basics there tends to be much more going on within the game pieces. It becomes a different task in that the playing style is more emotive. With the band I have to balance things to be able to include a vocalist and different percussive elements so you have to look at how you approach things to ensure you achieve the feel you are looking for.

WA: We are certainly going to be out there! We are very excited to get out there on our first tour. We have not been around very long as a band so it’s a nice feet to be able to string together a multi-state tour. The tour kicks off January 23rd and I believe runs through Mid-February. The record releases on January 18th so it’s going to be a great time to be out there supporting the record. I am looking forward to being out there on the road with my buddies playing music and eating junk food. Hopefully we will be able to get the band’s name out there more help generate some excitement around this new record.

AL: Do you have any other projects outside of the band we can also be watching for?

WA: I try to stay busy as much as I can. Being a young guy I try to juggle quite a few things at one time. I am at the point now where I am very driven so there is not just one project that I am working on right now that I can announce. I do have one project I am heading which falls more on the composing side coming out soon. More details on that should be coming out after we get done with this first run of shows.

For more info on The Crown Remnant you can check out their official website at www.crownremnant.com 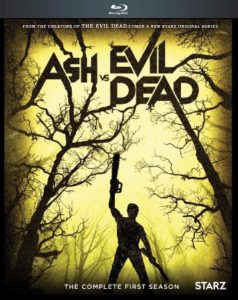 I am one of the biggest “Evil Dead” franchise” fans. I have met Bruce Campbell and the cast of the three films in the franchise numerous times. I think I did a double back flip when I saw that we were getting a continuation in the franchise with this new series for Starz. The season is jam packed with enough amazing fanboy head explosion moments to satisfy any hardcore fan. A few of the episodes wonder a bit but overall I see an insane amount of future opportunities in this series and I have a feeling it will stick around for a long time! I am just happy that Ashley J. Williams is back and kicking Deadite ass! Can’t wait for season 2 this October!

The first season of “Ash vs Evil Dead” consists of 10 half-hour episodes and consists as a follow-up to the classic horror film franchise “The Evil Dead” The series is executive produced by Sam Raimi, Rob Tapert, and Bruce Campbell, the original filmmakers of the franchise, and Craig DiGregorio (“Chuck”), who serves as executive producer and showrunner. Other than Bruce, who is literally gold with every word he speaks, the supporting cast is great as well with Xena herself, Lucy Lawless, plays a very important role. Also up-and-comers Dana DeLorenzo, Ray Santiago show that they can kick some ass as well and work well with Bruce.

Official Series Premise: The series follows Ash, the stock boy, aging lothario and chainsaw-handed monster hunter who has spent the last 30 years avoiding responsibility, maturity and the terrors of the Evil Dead. When a Deadite plague threatens to destroy all of mankind, Ash is finally forced to face his demons –personal and literal. Destiny, it turns out, has no plans to release the unlikely hero from its “Evil” grip. The cast is led by Bruce Campbell as Ash Williams, Lucy Lawless as Ruby a mysterious figure who believes Ash is the cause of the Evil outbreaks, Ray Santiago as Pablo Simon Bolivar, an idealistic immigrant who becomes Ash’s loyal sidekick, Dana DeLorenzo as Kelly Maxwell, a moody wild child trying to outrun her past and Jill Marie Jones as Amanda Fisher, a disgraced Michigan State Trooper set to find our anti-hero Ash and prove his responsibility in the grisly murder of her partner.

Starz is a great place for this show because they are able to show the gritty shit that other network stations would be afraid to. The Blu-ray includes impressive 1080p transfers. The show is shot digitally and even though it doesn’t have that gritty feel we all love from the franchise films, it looks amazing. Topped only by the outstanding Dolby TrueHD 7.1 presentation for each episodes, which kicks ass with the intense soundtrack and awesome surround chainsaw-welding effects. I should also mention that the slipcover for this release is a sweet lenticular cover!

The first Blu-ray includes audio commentaries on all episodes from cast and creators with some additional extras included on disc two. Sadly, there are no DVD or digital versions of the show are included. I would have expected at least digital since Anchor Bay does include for their releases like “The Walking Dead”. The commentaries are fun and you can tell that the cast really enjoyed working together for this series. Other than the commentaries there are only three other features. The first is “Ash Inside the World” which gives skim details on each episode with behind the scenes details. “How to Kill a Deadite” features Bruce Campbell talking about the title feature. Lastly there is a compilation of Bruce Campbell’s best moments from this season in “Best of Ash”. Honestly expect a little more from these extras.