Official Premise: Legendary filmmaking icon, Roger Corman, is back with his most outrageous film yet in this sensational, action-packed and darkly humorous reboot of the original Death Race 2000! It’s the year 2050 and America is controlled by an all-powerful corporate government ruled by The Chairman (Malcolm McDowell). The masses have been brainwashed with violent virtual-reality entertainment. The event of the year is the Death Race, in which a motley crew of violent drivers compete in a cross-country road race, scoring points for shamelessly running people over and driving each other off the road. The reigning champion and fan favorite, Frankenstein (Manu Bennett), who’s half-man half-machine, wants to take the crown, but his rebel spy co-pilot threatens his legacy.

universal is releasing “Death Rae 2050” as a combo pack with Blu-ray = DVD + Digital HD copy included. The 1080p transfer works perfectly with the visual overload of the film. The DTS-HD Master Audio 5.1 track nails with the action sequences. Great A/V combination! Special features are worth checking out for some cool featurettes. The first is “The Making of 2050”, which dives into this film behind-the-scenes with great detail from cast/crew. “Cars! Cars! Cars!” looks into the drivers and the stunts. Lastly “The Look of 2050” discusses the visual style of the film. 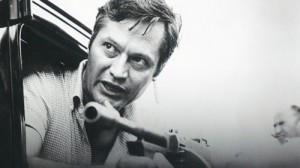 Whether you know it or not, you have most likely seen a Roger Corman film. He has been making movies for the last 60 years and has worked on hundreds of films. Roger Corman is considered a rebel for Hollywood and has never followed their rules. He has made films his way since he started and shows no signs of slowing down. He has also started many careers for some of our biggest talent in Hollywood such as Robert DeNiro, Peter Fonda, Ron Howard, Martin Scorcese and William Shatner to just name a few.

Director Alex Stapleton does an amazing job of mixing new interviews with archival footage from Roger’s outstanding career. Some of the interviews include the following talent: Paul W.S. Anderson, Peter Bogdanovich, Peter Fonda, Pam Grier, Ron Howard, Eli Roth, Martin Scorcese, William Shatner and Jack Nicholson. I feel that Jack Nicholson’s account of his work with Roger is honestly the best. It is emotionally charged and really touching. As much as I thought I knew about Roger Corman, I still found out many news facts like Roger was approached to make films like “Mean Streets” from Scorsese and “Easy Rider” from Dennis Hopper.

In the film, we go all the way back to his early days with classics like the original “Fast and Furious” and “Little Shop of Horrors”. Also covers the range of work from his Edgar Allen Poe films with Vincent Price to the Hell’s Angel film “The Wild Angels”, which actually was his 100th film and that was only in 1966. The film’s focus definitely is aimed at his earlier work from the 50’s to the 70’s. The cover art though is packed with his more recent films like “Dinoshark”, “Mega Piranha” and “Sharktopus”. I would have like to hear about the making of those but I feel that it should be in a different film. This film really focuses on his career and how he has became the legend he has and his affect on the business.

The Blu-ray presentation is decent but nothing special. The 1080p video is sharp with its 1.78:1 Blu-ray transfer. The audio track uses its Dolby TrueHD 5.1 track well since it is mostly dialogue. The special features are good overall but nothing special either. There are about 15 minutes of extended interviews with Corman’s acquaintances. Definitely worth checking out if you enjoyed the film. Each of the interviewees also get a chance to deliver their own personal messages to the Corman in “Special Messages to Roger”, which also runs about 15 minutes. Lastly there is a trailer included. All-in-all I was left very satisfied with this film and its extras.