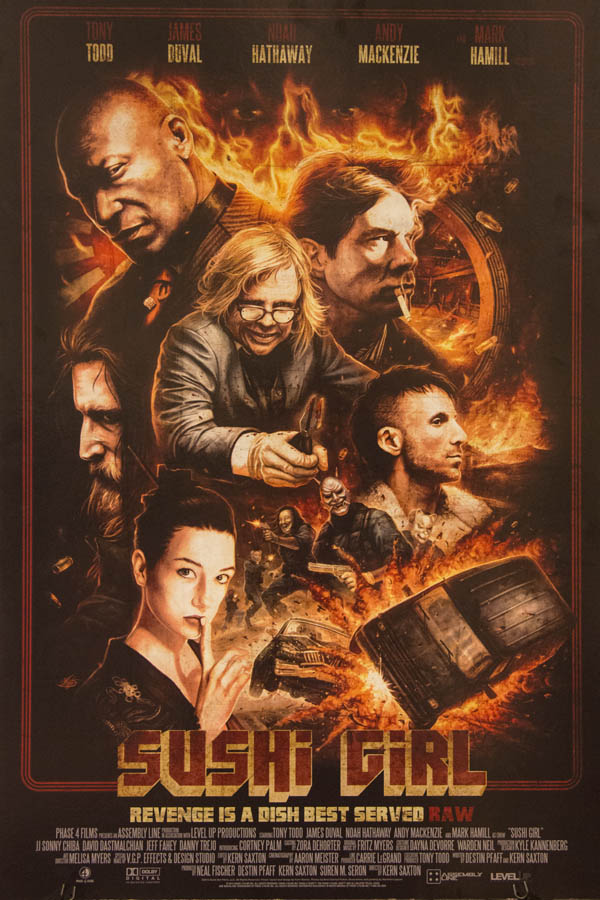 SUSHI GIRL centers on the compelling character of a man called “Fish,” just released after six years in jail after successfully not ratting on those involved in the robbery that sent him to prison. The night he is released, the men he protected with silence celebrate his freedom with a congratulatory dinner. The meal is a lavish array of sushi, served off the naked body of a beautiful young woman. The sushi girl seems catatonic, trained to ignore everything in the room, even if things become dangerous. Sure enough, the unwieldy thieves can’t help but open old wounds in an attempt to find their missing loot, with violent results.

Media Mikes had been working and promoting this film since August 2011. “Sushi Girl” is finally being released on VOD everywhere on November 27th, 2012 and in theaters on January 4th, 2013. It has been a long road for this little-movie-that-could but it deserves the attention. “Sushi Girl” is easily one of my favorite films of 2012. We got a chance to finally complete our interview series with the legendary Mark Hamill (“Star Wars”) and Noah Hathaway (“The Neverending Story”). We are proud to be supporting this film and hope you enjoy!

Sonny Chiba is the legendary Japanese actor, producer, director and martial artist. Sonny recently appeared as Hattori Hanzo in “Kill Bill: Vol. 1” and is appearing in the new film “Sushi Girl”. Media Mikes had the chance to ask Sonny a few questions, with the help of “Sushi Girl” producer Neal Fischer, about his new film and his amazing career.

Mike Gencarelli: Tell us about your character, the Mysterious Sushi Chef, and his role in the film “Sushi Girl”?
Sonny Chiba: If I told you that, it would not be a mystery any longer… Where’s the fun in that?

MG: How did you become involved with this project?
SC: I am a close personal friend with Neal Fischer and the other producers of Sushi Girl (Destin Pfaff, Kern Saxton and Suren Seron). Neal asked me if I would like to be in Sushi Girl and I asked him if I got to kill anyone on screen. His answer to me is top secret, but I told him if they got me a ticket, I’d be in their movie. And here we are.

MG: How was it working with Mark Hamill and Tony Todd, as well as the rest of the cast in this film?
SC: They are wonderful people and talented actors and I wish I got to work with them more. Unfortunately we were mostly on set at different times. Then my stay was cut short when we had the big Tsunami disaster in Japan, so we finished my final scenes and I caught the first flight home.

MG: How do you compare working on “Sushi Girl” to your role of Hattori Hanzo in “Kill Bill, Vol.1”
SC: I love acting, love martial arts and love marrying the two on film. I am always grateful to be on set and working with amazing people. Both were wonderful experiences.

MG: Which do you enjoy more working behind the camera or in front of the camera?
SC: Both! They are two sides of the same blade. Everything is connected. There is a right time for everything and I enjoy it all. Recently I have really been enjoying writing. I can go have dinner and suddenly get the urge to write and just stay there all night. I write on whatever I can get a hold of (paper, napkin, etc.) and then forget to eat the meal I ordered.

MG: How do you feel that character Takuma Tsurugi from “The Street Fighter” holds up in terms of toughness in today’s films?
SC: Oh “toughness” is very different these days. And I am very happy that fans today are still as excited about The Street Fighter series and Tsurugi (my character) as ever. So I think he holds up perfectly.

MG: If they ever remade “The Street Fighter” in the US, who would you want to see in the lead role?
SC: Hmmm… I think more about the films that haven’t been made yet. I have several film projects of my own that need to be made and they will have a good amount of that “toughness” you asked about before. Look for news about them in the near future

MG: How do you feel about “Golgo 13” in talks to be remade into another live-action film?
SC: Words cannot express my joy! “Golgo 13” is one of my all time favorites and is filled with amazing and edgy stories, all written and illustrated by Takao Saito. As you know, I played Golgo, the top international assassin of the world in the 1977 version, so it is very close to my heart. Golgo is not a simple two-dimensional character. And he is mysterious too! I was so overwhelmed and excited to hear from Neal that his boss, Samuel Hadida (Davis Films) obtained the rights recently. Since I know “Golgo” is in good hands, it is time for another live-action film.

MG: Are you looking forward to seeing “Samurai Reincarnation” on the big screen again at Singafest awards event?
SC: I am! I haven’t seen the film in a long time and it was directed by my good friend Kinji Fukasaku. Singafest is also presenting me with a Lifetime Achievement Award at the event. My sons (Makenyu & Gordon) will demonstrate karate then my daughter (Juri Manase) and I will do a demonstration with swords.

MG: Do you have any future plans to direct or act as fight choreographer in the near future?
SC: Yes. As I said, I have several project that I’m excited about. I have just signed a four-picture deal with Assembly Line. The first I will be co-starring with Tony Todd in the action drama “Bushido”. All of them are based on my original stories and I will be very active both behind and in front of the camera. So I am very excited for that and then following that we will have three more action projects. So keep an eye out!