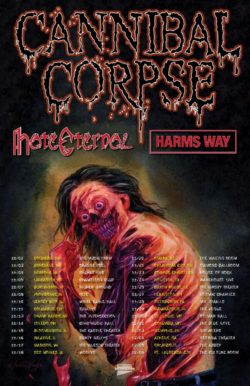 After releasing their 14th studio album, Red Before Black, last year to critical acclaim, Cannibal Corpse is ready to head back out on the road this winter in support of it – this time, with Hate Eternal and Harm’s Way joining them on the bill. See below for all dates! 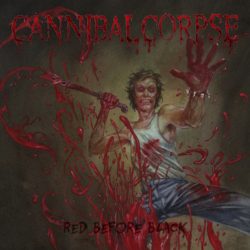 Cannibal Corpse returns with their 14th full-length studio album titled “Red Before Black” an album which clearly shows the soon-to-be thirty-year death metal veterans are unstoppable! The album serves to not only to reiterate this but to once more raise the stakes, making it very clear who sets the standards when it comes to compelling music this is equally brutal and complex. With 2017 seeing a slew of stunning new releases from death metal’s old guard “Red Before Black” stands strong and is a fitting statement for a band whose career spans almost three decades.

Not for the faint of heart “Red Before Black” is the latest offering from death metal heavy weights Cannibal Corpse and much like previous releases from the Buffalo, NY natives the band burst out of the gate going directly for your face! Tracks like album opener “Only One Will Die” and “Heads Shoveled Off” feature bombastic blast beats and thunderous double bass courtesy of Mr. Paul Mazurkiewicz while tracks like “Code of the Slashers” and “Shedding My Human Skin” feature some of the most guttural, demon summoning growls by George “Corpsegrinder” Fisher. With the guitars and bass acting as the proverbial cherry on top of each of the albums 12 tracks “Red Before Black” is one of the bands strongest releases in the past 5 years.

Chances are if you are already reading this then you what Cannibal Corpse is about and are familiar with their sound. If not but, you are looking for some balls to the wall death metal then do yourself a favor and grab a copy of “Red Before Black”! As a band progresses through their career often times sounds and styles change but in the case of Cannibal Corpse the band’s latest offering is equally if not more aggressive than the band’s debut, proving that just because a band gets older doesn’t mean they have to slow down or soften up.

Death metal fans rejoice, Cannibal Corpse is back with a new album. Everyone else, thumb your nose and shake your head. Cannibal Corpse is just shy of 30 years of throat crushing music and in poor taste lyrics, so it’s no surprise that “A Skeletal Domain” is more of the same that we’ve seen in the past. While this latest release is a lot better than the middle of the pack of their work, there’s nothing too monumental that puts itself among the best of their discography.

This new release keeps what I love most about Cannibal Corpse intact: The songs are perfect amount of time, as well as the album, and it’s a feverish blood rush of blasting drums and screeching guitars. Lyrics have always kind of come second tier in Cannibal Corpse and it’s not because they’re unimaginative, but because the usual suspects of violence are once again on display. Icepicks, revenge, murder and emotionless savagery are tools of the lyrical trade in their music.

The real hook for “A Skeletal Domain” is the guitar work by Pat O’Brien and Rob Barrett. You’d think after 13 records they’d start to lose a bit of those creative juices, but O’Brien’s stirring solo on the track, “Funeration Cremation” is downright mischievous. Their dueling solos on “Headlong into Carnage” are something of nightmarish dreams. Alex Webster is also key when strumming the bass since the bass is slowly becoming a lost art in the metal scene. After listening through the album, you have to wonder what kind of wicked arthritis is going to set into those shredding fingers of theirs.

Once again the annunciation skills of George “Corpsegrinder” Fisher make him the best in the business. “Kill or Become” may be one of the real peaks of his work on this album has he performs the most brutally clear chorus pieces in a while, that’s quite catchy and violently foreboding. Just the songs I’ve listed may be the only ones I listen to again once I hit the play button.

I’m in no way doubting that this CD will get some mileage along with my car as it plays through the speakers, but there’s a nagging worry that it’ll be a forgettable album altogether, save for those few songs. Forgettable isn’t a bad thing, but at times this album feels humdrum and not something legendary like “Gore Obsessed” or “The Bleeding”. I think for first time listeners, which there’s always some out there; it’s definitely a breath of fresh air in a sea of bands foregoing brutality on all levels for a low tuned guitar and generic beatdowns. No matter what they put out, I’m always eagerly awaiting the next dose of brutality. 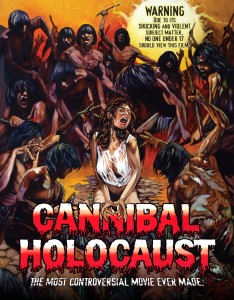 When it comes to cannibal movies, “Cannibal Holocaust” is easily #1. The film is also easily one of the most controversial films ever made. I remember seeing this in the horror isle at my local video store, looking at the VHS tape and seeing “Banned” all over it. I knew immediately that I needed to see this film. It also (along with “The Beyond”) introduced me to Italian horror films. Having seen this film 20 years ago and watching it today, it is still as absolutely unsettling as it was back then. Would I ever let my own daughter see this film, absolutely not!, but that doesn’t make it any less kick-ass! (Honey, if you are reading this 15 years from you, I am sorry). If you are a horror fan, I cannot recommend picking up this outstanding release any more. Worth every single penny!

Official Premise: Banned and heavily censored the world over, here is a film that surpasses its reputation as a shot-gun blast to the senses. Cannibal Holocaust presents the “found footage” of a group of four documentary filmmakers who experience brutal death at the hands of a savage South American tribe of flesh-eaters. This footage is so intense, so graphic and so unflinching in its realism that the director and producer of Cannibal Holocaust were arrested upon its original release and the film seized.

Grindhouse Releasing is a great independent distributor and they have really stepped up and put their names on the map with this release. The company is founded by Sage Stallone and Bob Murawski, who is also an Academy Award-winning film editor of films like “The Hurt Locker” and “Oz: The Great and Powerful”. It is companies like this that horror fans should be thankful for because they are the ones that restoring and delivering these cult classics films a wonderful presentation on Blu-ray. If you are looking for some other classic horror, cult and exploitation films, Grindhouse has much more coming up including, one of my all-time favorites like I said above, Lucio Fulci’s “The Beyond”, Duke Mitchell’s “Gone with the Pope” and S.F. Brownrigg’s “Scum of the Earth”.

When I see the words, “Deluxe Edition” being used on a Blu-ray release, I usually shrug my shoulders and think “Yeah yeah, aren’t they all!” Well this three-disc Deluxe Edition is what a damn release. It includes two  Blu-rays as well as a newly remastered soundtrack CD of the original score by Riz Ortolani (“Mondo Cane”) presented in an absolute stunning 24bit/96khz sound and taken from the original studio master tapes. Audiophiles are going to go crazy for this no question!  Speaking of audio the Blu-ray also comes with a brand new digital stereo re-mix and original mono mix. The 1080p transfer for this found footage film puts today’s crap to shame with a new high-definition digital restoration of the original director’s cut.

When it comes to special features, this release is not only jam-packed it is over flowing. There are two full feature-length commentary tracks with director Ruggero Deodato and star Robert Kerman, as well as with stars Carl Yorke and Francesca Ciardi. There are brand new really in-depth interviews with Ruggero Deodato, Francesca Ciardi, assistant director/co-star Salvo Basile and cameraman Roberto Forges Davazati. There are classic vintage interviews with Robert Kerman, Carl Yorke and Oscar-nominated composer Riz Ortolani. There is an extensive still galleries and theatrical trailers from around the world, which is a blast to check out for sure!

Just to further prove that Grindhouse didn’t just get the rights to release “Cannibal Holocaust” and just threw it out there for sale. They included a super cool glossy 24-page booklet containing liner notes by director Eli Roth, legendary horror journalist Chas. Balun, Euro-music expert Gergely Hubai and Italian exploitation film authority Martin Biene. There is also a uncensored and shocking reversible cover with original art by notorious illustrator Rick Melton underneath the embossed slip cover. If that isn’t enough there are still tons of great Easter eggs including the Grindhouse Releasing theatrical re-release premiere and Necrophagia music video directed by Jim VanBebber and much more.