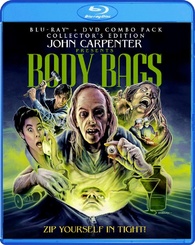 “Body Bags” was a made-for-TV anthology that aired on Showtime. Originally it was planned to be a television series, similar to HBO’s “Tales from the Crypt” but never panned out. The film is jam-packed with great genre talent including Mark Hamill (“Star Wars”), Robert Carradine (“Revenge of the Nerds”), Tom Arnold (“True Lies”), Sam Raimi (“Evil Dead”), Stacy Keach (“Up In Smoke”), David Warner (“TRON”) Deborah Harry, Sheena Easton, Twiggy (Member of Marilyn Manson), David Naughton (“An American Werewolf In London”), John Agar (“Tarantula”) and great cameos by Wes Craven, Tobe Hooper and Roger Corman. Overall, this may not be the best anthology but it is still a blast to watch and a must have for any true horror buff.

Official Premise: Two Masters of Horror John Carpenter (“Halloween”, “The Thing”) and Tobe Hooper (“The Texas Chain Saw Massacre”, “Lifeforce”) come together to create a chilling anthology of terror. Alex Datcher (“Passenger 57”) stars as a woman working the late shift at The Gas Station while a killer is on the loose. Then, Stacy Keach (“Road Games”) can’t stand the thought of losing his Hair and he’ll do anything to keep it. And finally, Mark Hamill (“Star Wars”) portrays a baseball player that submits to an Eye transplant after he loses an eye in a car accident.

Shout! Factory delivered this film as a Blu-ray + DVD combo pack. The 1080p transfer looks decent for a made-for-TV film and the DTS-HD Master Audio track works with the film’s suspense and score. In terms of special features, there is some great content here for horror fans. There are three audio commentary tracks included, the first is with director John Carpenter and actor Robert Carradine on “The Gas Station”. The second is again with director John Carpenter and joined by actor Stacy Keach on “Hair”. The last with with producer Sandy King on “Eye” and is moderated by Justin Beahm. There are some some great new interviews with John Carpenter, Producer Sandy King and actors Stacy Keach and Robert Carradine. Lastly there is a trailer included as well. 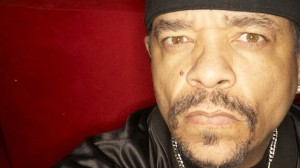 Tracey Marrow better known to the world as Ice-T first broke on to the scene in the mid 1980’s as part of a new form of rap labeled “gangster rap” which was just starting to emerge from the west coast of the United States. After releasing several successful/controversial albums Ice would evolve into a modern day renaissance man appearing in several movies and television shows such as “New Jack City” and “Law and Order: Special Victims Unit”. Ice-T has always noted pimp/author Iceberg Slim as an influence and is a producer on a new documentary about Slim titled “Iceberg Slim: Portrait of a Pimp”. Media Mikes had the chance to speak with Ice recently about the film as well as about his heavy metal group Body Count’s new album.

Adam Lawton: Other than noting Iceberg Slim as an influence what was it that interested you in producing a film about him?
Ice-T: The film was really Jorge my manager’s idea. He and I have been working with each other for going on 30 years now. He and I wanted to get into the film business and make some films so we decided to start with documentaries. We wanted to do critically acclaimed type work and get our profit out to the film community. I started with “The Art of Rap” and Jorge chose to do one on Iceberg Slim. When he and I first got together Jorge was coming from an entirely different community than mine. He was pretty much a square so I told him that if he was going to manage me then he was going to need to read all of the Iceberg Slim books. I gave him all the books and told him that I would quiz him on them. He pretty much got turned out of course but it’s always been a big part of his life. When he came to me with the idea I thought it was perfect. I executive produced this film but Jorge pretty much did all the ground work.

AL: How much input or direction did you give throughout the filming process?
Ice-T: I would see pieces and cuts throughout the filming/editing portions of the project and give my input. I also was involved in some of the soundtrack side of things as well as some of the editing. Jorge was pretty much bringing me things in pieces and when I finally got to see it all put together I was just blown away. He did a great job.

AL: Was this sort of your first venture into producing?
Ice-T: I have been involve don some things prior to this but what being an executive producer really means is you put up the money. In this case Jorge put up all of his own money. I do this type of thing with records all the time. A lot of times people want to get projects done however they don’t know how to complete them. Having been in the game now for over 25 years I am someone that knows how to get things done. Jorge is very efficient so I didn’t have to do a lot on this project. Jorge knows what he is doing and if it got by me people were going to love because I am such a huge Iceberg Slim fan.

AL: You appear very briefly in the film. Was this something that happened due to editing or was it a conscious decision on yours and Jorges part?
Ice-T: I am just a normal person and the film is not designed to be about me. Due to the fact I am a fan and am a person that was influenced by his work I appear in the film. Before reading Slims book I never thought I could tell my stories and the stories of the street in my music. I am a part of pop culture so they knew I was valid and asked me to speak on what the books did for me. I was interviewed just like Chris Rock and Snoop. That was the intention as I didn’t want to be the narrator or anything. I just wanted to blend in to the movie.

AL: Were you surprised at the people involved who spoke about Slims impact on them?
Ice-T: Henry Rollins and Rick Rubin released the Iceberg Slim soundtrack so that’s how they got involved. As we talked to more and more people they would tell us that we should talk to this person or that person. It started with one person and went from there. As far as it being difficult or people not wanting to share stories you can sometimes run in to that when you are talking to the family especially when the person you are talking about has passed. Everyone in the family wants to make sure that you are not going to be disrespectful. In this case they all knew I was a big fan and that I would handle things appropriately. They actually saw the movie before anyone else and were just blown away. They were very excited with the fact that this film gave people a better understanding of who Slim was and that he wasn’t just this guy that wrote books about pimping.

AL: For you personally what was the most rewarding part of the project and then on the other hand the most difficult part?
Ice-T: The difficult part came from more of a technical stand point more than anything. When you see some of the transitions we used there is a lot of high tech stuff going on there. That was all done in post and though it may look simple there was very little that was simple about that. We had an illustrator come in and do some animation for us as well so to get all those things to click and feel the same was definitely difficult. We had to go through a lot of licensing to get permission to use some of the things we wanted to use so that was pretty hard. Nowadays everyone has gotta get paid. (Laughs) I think the most rewarding thing for me was that I got to find out things about Iceberg Slim that I didn’t know. I mean I learned that his wife wrote the books! Nobody knew that. The quote at the end where she says that “Iceberg Slim was both of us” was great. The beauty of a documentary is that you get to tell a story a lot of times from the horse’s mouth and it goes down in history.

AL: Do you have any other projects that we can be watching for?
Ice-T: My group Body Count is recording as we speak. We are out in Vegas right now writing the new album which is going to be titled “Man Slaughter”. We have a record deal now with Sumerian Records which has artists like Lamb of God and some other big groups so be watching for that to come out soon. Jorge and I are also looking at some treatments for features as well as television shows.

To celebrate the release of BODY OF PROOF: THE COMPLETE SECOND SEASON on DVD, Media Mikes would like to giveaway 20 DVD’s! For your chance to enter-to-win, please leave us a comment below or send us an email and let us know your favorite character on the show. This giveaway will be open until September 28th at Noon, Eastern Time and is only open to residents of the United States. Only one entry per person, per household; all other entries will be considered invalid. Once the giveaway ends, Media Mikes will randomly pick out winners and alert the winners via email.