Jeremy Spencer is the drummer behind the bombastic sound of the heavy metal band Five Finger Death Punch. In the past couple years the band has released two successful studio albums and performed to thousands of fans. To add even more to an already crazy schedule Spencer found time to pen his first book a biography titled “Death Punch’d: Surviving Five Finger Death Punch’s Metal Mayhem”. The book is a candid, no punches pulled account of Spencer’s life both in and out of the band. Media Mikes had the chance to speak with Jeremy recently about the books creation as well as what the band has planned for 2015.

Adam Lawton: Can you give us a little over view of the book and tell us why you chose now to the time to release a book like this?
Jeremy Spencer: It all sort of started around the time that I had just gotten out of rehab. I had started writing basically about my whole life as a way to process and get something outs. It was very therapeutic. Anytime I had some down time I would start writing. Once I had a large amount of stuff I started looking back over it and found a lot of it very interesting. I sent it out to my dad to get his take on it and he thought that some of the stuff I had written could be a benefit to people. He did think it needed to be edited down so I would be ostracized as it was very raw and real. (Laughs) He helped me with that and I ended up sending it off to our management and they loved it. From there they started shopping it around to the publishing companies. It wasn’t anything I was planning on but things took shape and we moved forward. Even though our band is still popular and on the upswing which is not when books from band members normally come out, but that ended up being all the more reason to put it out when we did. I think the story can help a lot of people and the positive feedback has been great thus far. This book has helped me with a lot of different things in so it just been a great experience so far.

AL: Being so fresh out of rehab was it hard to look back at some of these stories you put in the book?
JS: Some of it was horrifying! I wasn’t proud of a lot of it, especially when it was where I hurt someone. Those things made me sad. I have tried to work through things the best I can and I certainly wasn’t proud of who I was during those times. At the same time if I didn’t go through that stuff I wouldn’t be where I am now. I think by being a drug addict it forced me to look at things that I may not have if I was sober. Once you start dealing with the addiction side of things you realize that there is more deeply rooted stuff to also address as well. That for me has been a blessing.

AL: The books layout jumps back and forth between the past and present. Was that something that was a conscious decision or was that idea taken directly from your initial writings?
JS: That was something that happened during editing and was suggested by the book company. I am really glad they suggested that because it’s a bit different. I haven’t really read any books that do that. I wrote sort of chronologically and that has been done so much that we decided to change it up. I am really happy with how it turned out.

AL: Throughout the book you speak very candidly about the other members of Five Finger Death Punch. Was it difficult being that truthful knowing your still going to be working with them on a day to day basis?
JS: For sure. I definitely toned things down a bit as my intentions were not to throw anyone under the bus. I made sure to talk with the guys about anything I may have thought was questionable beforehand. I gave them a chance to read the parts they were in ahead of time if they wanted to just in case there was any worry or things like that. This project meant a lot to me and I didn’t want it to hurt anyone. I had to obviously pull back the curtains some so the reader could get a better feel for the story so if needed I changed people’s names or things like that. I was very cautious about all those things. Again there were a few things that got removed. Some of the things I found hilarious at first we decided to leave out after talking a little bit more about them because ultimately they didn’t fit well with the story. I think everyone was pleased with how the book turned out as no one was exposed too much.

AL: With the book having been out now for a few months is there anything that made it into the book that you sort of regret having in there?
JS: I am comfortable with. I don’t really want to change anything or wished I had done something differently. If that first draft I submitted would have come out it would have been terrible! (Laughs) The book went through a lot of editing. The whole thing was a process as there are just so many different steps you have to go through when writing a book. I have lived my several times over now.

AL: The band recently wrapped up a really great co-headlining run with Volbeat but, have there been any discussions about what the band will be doing in the coming year?
JS: The band has huge plans for next year. Once we get through the holidays we will be heading over to Japan for a run of shows there. After that we have a little time off and then we will be heading in to the studio to make the new record with hopes of a summer release. We also have some plans to do a few spring shows and a European run with Judas Priest. First thing first we have to get the new record done and out. 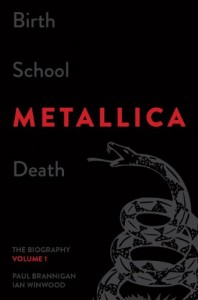 “Birth School Metallica Death: The Biography Vol. 1” written by former Kerrang! Editor Paul Brannigan and British rock journalist Ian Winwood is an in-depth look at arguable one of the greatest heavy metal bands of all time. The first in a two part series Vol.1 documents from the bands inception in 1981 up through 1991 and the release of the groups ground breaking “Black” album. “Birth School Metallica Death: The Biography Vol. 1” is being released via Da Capo Press and features 378 pages along with 8 pages of photos.

From the time I first saw Metallica’s video for “One” I was hooked. Anything and everything related to the band I had to check out (good or bad) and even though they had released 3 albums prior to “And Justice for All” the album spawning the single “One” and I was late getting to the party it didn’t hinder my quest for all things Metallica. Prior to reading this book my expectations were not very high as I had thought that I pretty much read everything about the band that was available. Upon delving in to the 378 pages you instantly realize that you are going to be in for a treat as the authors take you places normally off limits to the public. Weather they are talking with members of the band at their practice space known as “HQ”, Telling stories of speaking with Lars on a phone booth at 3am or covering the listening party for the “Black Album” “Birth School Metallica Death: The Biography Vol. 1” has a bit of everything. Even if you have heard some of these accounts before I found it quite interesting to hear different take. Along with some great writing are 8 pages packed with rare photos going back to when Dave Mustaine was in the band. I only wished that there had been a few more of these photo pages placed throughout the book to correspond with the subsequent chapters.

Fans of Metallica and or heavy metal music in general will surely enjoy “Birth School Metallica Death: The Biography Vol. 1”. Not only does it contain some really cool interviews and accounts but it’s a fairly straight forward and easy read. So even if you are terminally shaken from years of head banging and moshing I encourage you to put down your devil horns and stagger over to your nearest book store and pick up a copy of this book. 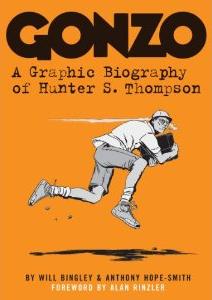 I have been fascinated with Hunter S. Thompson’s work for many years. He has such a unique perspective on the world and will not be able to be replaced by anyone. This book is really an amazing look into this life from the birth of Gonzo Journalism to “Fear and Loathing in Las Vegas” to his sad death. If you are a fan of HST, this is an much purchase.

By the way, did I mention it is actually an illustration biography. Thanks to the amazing illustrations of Anthony Hope-Smith, HST’s life to death is presented to you in this wonderful format. The book itself is presented in soft cover and its pages compliment the very crisp and sharp illustrations very well. I wasn’t sure what to expect from this biography but it was very intimate and enjoyable. I recommend this graphic illustration very highly.

This book is one of those books that you just have to revisit over and over. I have a feeling as well, I will be passing this book around to many of my friends to enjoy as well. Be sure to check out the beautiful and honest foreword from HST’s editor Alan Rinzler. Lastly, I commend Abrams for publishing this fantastic book and I would love to see future volumes like these as well. I leave you with one of my favorite quotes from Hunter S. Thompson “No sympathy for the Devil, keep that in mind.  Buy the ticket, take the ride”.