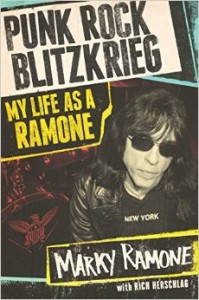 When punk rock reared its spiky head in the early seventies, Marc Bell had the best seat in the house. From his early days with one of America’s first metal bands Dust to CBGB’s staples Wayne County and Richard Hell and the Voidoids. Marc was there. In 1978 Marc Bell joined The Ramones becoming Marky Ramone and that’s where the real story begins. “Punk Rock Blitzkrieg: My Life as a Ramone” is an honest look inside the world of a punk icon.

Over the course of the books 400 plus pages Marc/Marky takes us on a journey like no other. From his early years growing up on the mean streets of New York City to his countless adventures around the globe with The Ramones it’s all here. Sure there have been several other books from Ramones members recounting their times with the band but for me those stories took more of a back seat as Marky’s tales of getting his first record deal to performing with the transsexual Wayne County during the early seventies when even the mention of transsexual behavior was something that was just not done, were the ones that grabbed my attention and made this book really stand out. T hough I questioned some of the books editing its 15 pages of color photos and the books straight forward approach makes this a must have for not just Ramones fans but for fans of music in general.