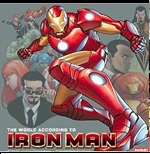 The World According to…

When I was younger I loved books that came with their own little hidden treasures, pull out letters or drawings from characters, something tangible from the world of the book. In this respect and more I suspect Insight Editions new “The World According to…” set of Avengers books will be greatly satisfying to the young Marvel fan.

Told from the point of view of one of Earth’s Mightiest Heroes, The World According to Iron Man (by Larry Hama and Marc Sumerak) and The World According to Thor (Sumarak) are fun introductions to Tony Stark and Thor Odinson, touching on all the aspects of their respective universes from origins, to villains and allies. Both boast bright, engaging illustrations (by Mirco Pierfederici for Iron Man, and Freddie E. Williams II for Thor) that warrant a closer look to catch some fun background action. You can spot Black Widow rebuffing Hawkeye at Stark’s party or, what I’m 98% 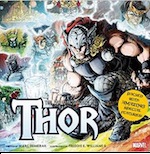 positive is Disney’s Cinderella castle in the realm of Alfheim from our “Tour with Thor” (synergy, kids!)

When it comes to the Avengers, my personal favorite is Thor so that likely contributed to my enjoying his story slightly more, although perhaps his Asgardian exclamations–By Odin’s stamp collection!–simply jump off the page louder than Stark’s trademark sarcastic banter does. Author Sumerak also cleverly lets Thor give over narration of his tales to fan favorites The Warriors Three and Loki which contribute to filling out his “World” a little more than Stark’s. That said, the nifty special features that Iron Man’s book come with–Stark Industries Business Cards and Stocks, blue prints of the technology–would definitely excite the young reader looking to grasp onto a piece of the Stark empire. Perfect for the young fan who’s perhaps not exactly ready to square off with Ultron on the big screen.