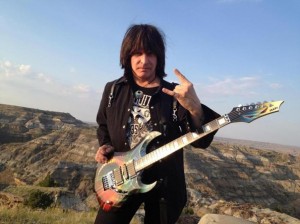 Michael Angelo Batio first burst on to the music scene in the late 1980’s with his band Nitro and quickly became known for not only his playing speed but also for his use of unique guitars. In the early 1990’s Michael ventured off on a solo career which has taken him to over 50 countries around the world and also was recently named by Guitar World readers as the fastest player in the world. Media Mikes had the pleasure of speaking with Michael recently about the creation of his new album titled “Intermezzo” and the latest edition to his line of Dean MAB guitars.

Adam Lawton: What can you tell us about your new album?
Michael Angelo Batio: The album is titled “Intermezzo”. The term intermezzo is an Italian musical term which denotes a piece of music that is in between two major parts of an opera. During longer opera’s there would be an intermission and during that time there would be musical pieces that would be played titled intermezzos. Sometimes these works would become more popular than what was being played before and after. I have had an amazing career up till now and there are a lot of amazing things going on within music. I consider myself to be in that intermezzo phase with my career. That’s where everything really started. The tracks on this release are all new original material and I got some really amazing guest musicians to perform on them with me. Everyone from George Lynch and Rusty Cooley to Michael Romeo and Jeff Loomis had a part in this record. There is just so much talent on this record and I think it is the best record I have ever done. I am very happy with how it turned out. This was my first time using seven string guitars and I think this is the heaviest album I have ever done. It not as time signature intense as some of my other stuff but it is a super complicated album even though it may not sound it.

AL: How did you go about selecting who you wanted on the record and, which track they would play on?
MAB: When I was writing I wanted everything to be new. I wasn’t going to rehash old song parts or anything like that. For example on the song “8 Pillars of Steel” I put some music together in 4/4 timing and then played some very syncopated sections along with that. I then asked the owner of Dean Guitars, Elliot Rubinson to play bass as he is a phenomenal player. From there the idea was to have everyone play over the same chord progression. By doing that you are able to here different players take on the same music. That track came out great and the solos really tell a story as they progress from player to player. We did a lot of crazy things on the record. Sometimes we would go back and add things after we got peoples take and then it would go out to the rest of the guys. I just had an idea and it got bigger than life. Everyone I used on this album is not only a friend of mine but I am a fan of their work. I am sure I could have even gotten more guys but at some point you have to make a stand and say enough is enough. (Laughs)

AL: You also had fans write a couple songs for album. Can you tell us about that?
MAB: Dave Reffeit is kind of like my right hand man on this record. I had most of the songs written and they were all pretty close to being finished before we got Michael Romeo. I had told Dave one day that I didn’t have any more in me and nothing else had been recorded so I asked Dave if he could throw something together and he said yes. Dave is a young guy that is very metal and comes from a little bit different school than I do. He wrote the song “Juggernaut” and we had my engineer mix it and it came out amazing. I have a big fan base and I like engaging them so this was my way of giving back a little. I actually had another fan by the name of Maxwell Carlyle who plays in the band Hellion write a song for this record as well. This was actually the third song Maxwell has written for me. Everything worked out great and it fit well within this record.

AL: Can you tell us about the addition of a 7 string model to your line of Dean MAB guitars?
MAB: One thing a lot of people might not know about me is that I was probably one of the first guys to use a seven string guitar in rock. If you watch the Nitro video for the song “Freight Train” you can see that the top two necks on the quad neck guitar I am playing are in fact seven string necks. This was at least a year or two before Steve Vai came out with his seven string. I have always been interested in extended range instruments and pushing the limits of things. For me I have wanted to use seven string for quite some time and I was always bugging Elliot at Dean to put one out for me. Dean wasn’t known for seven string guitars so he was always hesitant to put one out. He ended up telling me that if I wrote some seven string music the company would put out a model. The whole “Intermezzo” album is seven string music. (Laughs)

AL: How involved were you in the design of this model?
MAB: I like wild shaped guitars. I have had everything from double neck guitars to rocket shaped guitars however; I am not stupid enough to think that everyone else likes what I like. The idea of a signature guitar is in fact your signature but there is a lot of money involved when starting with an idea and ending with a finished product. The companies have to be able to sell these models when it’s all said and done. I told Dean Guitars not to put my name on my models as historically models with players names on them don’t sell. We did settle on calling the series the MAB series so that it was associated with me and the first model I did for the company sold through the roof. The new seven strings follow the idea of what we did with my previous models as we wanted to keep the body shape normal and not go with a leap of faith. From there we put in components that I really and that’s how it all really developed.

AL: Can you tell us about your upcoming tour plans and how you plan to perform the new material live?
MAB: Some of the stuff from the new album I won’t be able to perform live but I have been very fortune in my career as I have multiple ways that I can go out and tour. I have the option of doing clinics, solo shows and a multi-media rock guitar tribute show that I do as well. I have been working with two different companies here in the states to put these multi-media shows on as I really enjoy going out and doing my version of other peoples music. I will be performing some of the “Intermezzo” material in a number of these performance settings and between these three options I have about 120 shows lined up this coming year.

AL: Do you have any other projects coming out that you would like to mention?
MAB: I have worked with the guitar tutorial company Metal Method over the past few years to put out a couple videos titled “Speed Kills 1, 2 and 3”. What we are looking to do is to go back and reshoot those. This series was originally shot in 2004/2005 which wasn’t really a long time ago but in the video production world these are ancient. The playing on these was still there but they weren’t shot in high definition or anything. We think that we can make things look a lot better by redoing the series so along with touring I am going to try and fit this work in as well. I really want to run with “Intermezzo” along with everything else.
For up to date information on Michael you can visit his official website at www.angelo.com