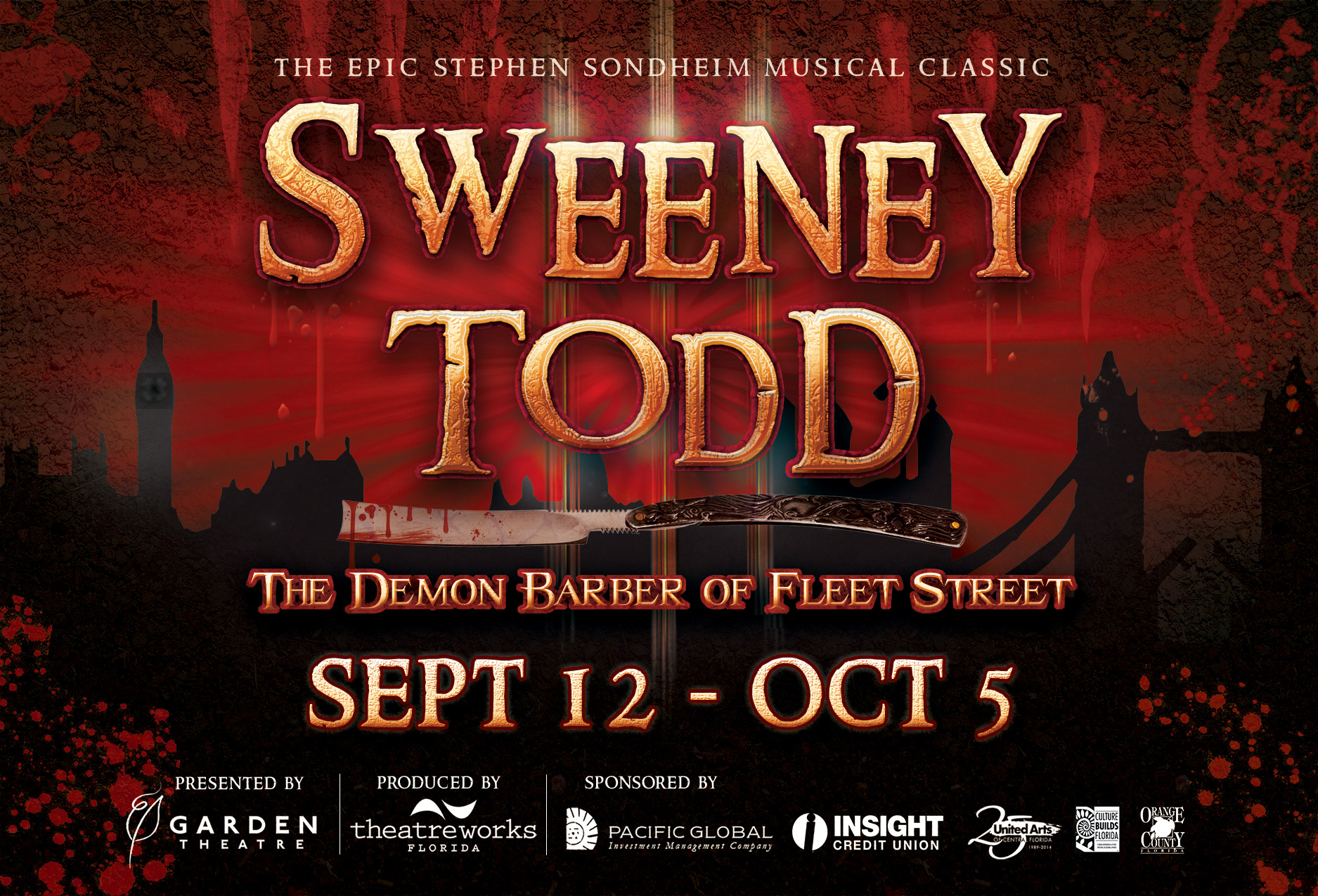 Sweeney Todd will be the first live play to use the Garden Theatre’s new state-of-the-art lighting system, which includes LED lights programmed on a cutting-edge console with the ability to make lightning-fast adjustments, as easy as from a mobile device. These new elements have been added to intensify the patron experience and immerse them deeper into the story.

The suspenseful, heart-pounding Stephen Sondheim masterpiece, currently in its 35th anniversary year, tells the infamous tale of revenge by an unjustly exiled barber returning to 19th century London. His thirst for blood soon includes his unfortunate customers, while a resourceful owner of a pie shop downstairs has the people of London lining up in droves for a mysterious new meat pie recipe.

Sweeney Todd is directed by Scott A. Cook, the artistic producer of TheatreWorks Florida. It is a definite departure from Cook’s most recent shows at the Garden Theatre – the musical comedies Nunsense and Legally Blonde. Cook has developed show designs and concepts for companies such as Universal Studios Florida and the Walt Disney World Company, and won numerous producers’ honors including the Pierrots Award, Best Musical for Cats at Theatre Winter Haven in 2006 and 10 awards including Best of Fest at the 2012 Orlando International Fringe Festival for Little Shop of Horrors.

As he prepared for Sweeney Todd, Cook researched the history of the character and discovered a debate as to whether a demented barber really existed. The character first appeared in an 1846 “penny dreadful,” a type of horror tale of the era published in serial form. Many of these publications were fictionalized accounts of real crimes, and allegedly the writer who first set down Sweeney Todd’s name in print was known to hunt regularly through newspapers for his story ideas.

“The 19th century London world of Sweeney Todd is a twisted, bizarre, nightmarish puzzle that resonates with the audience’s own senses and experiences, begging the question: what is evil and what is madness?” said Cook. “The message of Sweeney Todd is clear: there is evil and madness afoot and nothing will be served up plain. Be warned…”

Tickets to Sweeney Todd are $25 for seniors and students, $29 for adults. Show times are Thursdays through Saturdays at 8pm and Sundays at 2pm. There will be an Industry Night performance on Monday, September 29 at 8pm with $15 tickets for those in the theatre industry.