Michaelbrent Collings is the writer of the latest film from WWE Studios, “Barricade”. The film was released on DVD on September 25th and I recommend it highly. Michaelbrent is also a black-belt martial artist and in his past life was an attorney. Currently, he is focusing on writing full-time not just screenplays but also novels. His latest novels are called “Apparition” and “Billy: Seeker of Powers”. Media Mikes had a chance to chat with Michaelbrent about his his work with WWE on “Barricade” and also what else he has planned next.

Mike Gencarelli: How did you go from black-belt martial artist to attorney to writer?
Michaelbrent Collings: Geez, there’s a question whose answer could go on FOREVER. Short answers: I’ve been involved in martial arts for much of my life, dating back to the day I realized that a teen who weighed all of one hundred pounds was going to have a full life working as a doormat for bigger kids. Also, I realized that girls did not, as a rule, dig guys that they could out-bench press. Martial arts seemed like a good way to both take better care of myself and build up some seriously lacking strength. Thus I became the towering colossus of manliness I am today. As for the attorney to writer thing, I always liked writing, but never liked the idea of being “that guy.” You know, the guy who’s 40 years old and still living in his parents’ basement while trying desperately to convince girls he’s “just waiting for his big break.” So I went to law school, the last refuge of the incompetent. And as soon I started making money as a writer, I was pretty much out of there (the law thing, that is). So now I’m no longer a lawyer, just a writer. And my wife and family both assure me I’m much happier because of it.

MG: How did you get involved writing the screenplay for WWE Studios’ “Barricade”?
MBC:It was actually an original script that I took to them. I had written this ghost script called BARRICADE, and a lot of people in Hollywood liked it. It ended up going to WWE Studios, where Richard Lowell and Sharyn Steele, two of the producers there, got their hands on it. They loved it, but it wasn’t right for the studio at the time. Sharyn (who is still a great friend of mine and a peach of a gal) ended up going her own way, but Richard stayed at WWE Studios. A couple years later there was a management change at WWE Studios. The new VP walked in and told Richard that they wanted to do a ghost movie. Richard, it turned out, had more or less kept BARRICADE on his desk for the intervening years, and handed it right to the VP (another really cool guy named Steve Barnett). Steve loved it, so Richard called me in to the production company’s offices and I met with him and Steve. I think they’d probably already decided that they wanted the script at that point, but wanted to make sure I was someone they could work with. Well I already liked Richard, and Steve and I hit it off really well, so the next day I got a call that they wanted to option the script. They did so, and then they purchased it a bit later, and voila!

MG:How does the film compare to the page?
MBC:It’s different in a lot of ways. I mean, for one thing it’s a surreal experience to go from a hundred or so printed pages to an hour and a half of film that cost millions to put together. Not only that, but everyone who works on it puts their imprint on it. So when WWE Studios purchased my original script, the first thing that happened was they hired me to do a rewrite to accommodate some of the producers’ “visions” of the piece. The ending was changed a lot, due to a belief on their part that the ending I had (which was quite dark) wouldn’t be something American audiences would like. Then they hired a director, and I understand he pushed the script more toward the psychological thriller aspect, when originally it had been a 50/50 blend of psychological thriller AND ghost story. And then there were changes to accommodate production scheduling, location issues, editing, etc. etc. etc. So in the end it was nearly as much of a surprise for me to watch the finished product as it would have been for anyone else in the world.

MG:Tell us about your next film “Darkroom”?
MBC:DARKROOM is a really cool script I did that deals with a girl getting out of prison. She’s young, went to jail on a manslaughter charge, and now she lives in a halfway house during parole. As part of her parole she has to get a job, and lands as a gofer at a real estate photography company. She shows up to work on day one (the company is shooting a gloomy mansion, of course), and is told that the model they were counting on didn’t show up so she’s got to fill in. The photo people give her a change of clothes, she changes in the bathroom… and when she comes out she’s been locked into the mansion. Turns out the photo company is owned and staffed by a group of crazy siblings who tortured and killed their own mother, and now intend to reenact the fun with her. So it’s basically one of those “feel good” movie for the whole family flicks you’ll probably see on the Disney channel at some point. Ha!

MG:You have written many novels, how does it compare to doing film?
MBC:It’s totally different. I love doing both, but the way I describe it is that they’re like two different languages. Screenwriting requires an extremely high level of precision and clarity because there are only a very few words to describe characters, location, action, and dialogue. But at the same time, books are tough because you have to keep an audience’s attention for many hours of reading, as opposed to just one or two for a script. Some stories lend themselves to one or the other. I like stories that work for both, because I love to write novels of scripts and vice-versa.

MG:Tell us about your latest and upcoming novels?
MBC: My latest novels are called APPARITION and BILLY: SEEKER OF POWERS. APPARITION is a crazy-scary book about a family where the mother tries to stabe her two kids to death. The dad saves them, and the mother then turns the knife on herself. A year later, Dad and the two kids are still putting their family back together… and he starts fantasizing about killing his children. Turns out there is an otherworldly entity at work, one that feeds on the blood and death of children, and one that possesses the kids’ own parents to do the dirty work. BILLY is the other end of the spectrum: it’s a young adult fantasy that’s the second book in my bestselling BILLY SAGA. It’s about a misfit kid who discovers that his favorite teacher is a wizard and that he (the kid) may be the key to a war between two factions of magic-users. The kid may also be a weapon that destroys the entire world, so it’s definitely a high-stakes book, but with lots of fun and humor as well. And upcoming… I have a novel called HOOKED that I’m working on and it should be out before too much longer. I can’t say too much about the plot because it’s THAT fun, but I will say I hope it will be kind of the anti-TWILIGHT: teen vampires done right. No sparkles. 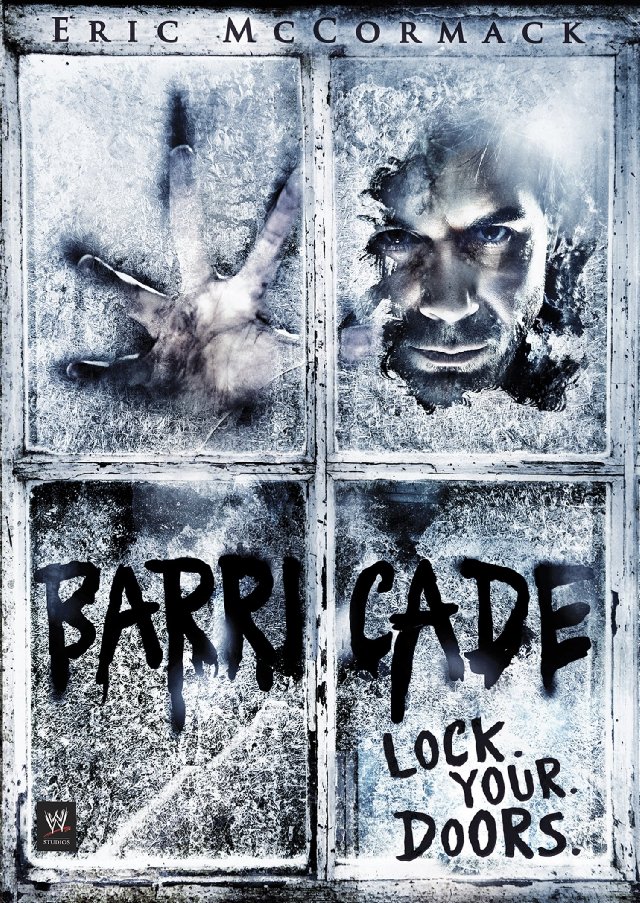 I love the fact that WWE Studios is branching out with its films. I was surprised to see that Eric McCormack was starring in this film and not a wrestler but he was well-cast. The film has more horror and terror than a bunch of recent “horror” films I have seen this year combined. It is fast, intense and packs a hell of a bunch. It also aims to play a lot of tricks with your head. Even though the film runs just over 80 minutes it is non-stop and plays perfect to the genre and delivers a really fun-time.

Terrance Shade (Eric McCormack) takes his children on a holiday getaway to a cabin in the woods. But when a blizzard buries the house, the family finds themselves trapped and without communication. As the storm surges on outside, a sinister presence materializes. Unable to explain it, and unable to escape it, they quickly realize that maybe they haven’t locked the evil out…instead they’ve just locked it in.

The film looks and sounds great even though it is on DVD. It’s DTS-HD Master Audio track works perfectly with the suspense and delivers it very well. The special features are also fantastic and a great compliment to the film itself. “Blueprint to Fear: The Cabin” takes us on a tour inside the film’s haunted house. “Whiteout” focuses on creating the special effects and the blizzards. “Breaking Type: Eric McCormack” showcases his characters transforming into madness. Lastly “Manning Park” takes us through how they transformed a ski resort into the film’s set. After really enjoying the film, the features just aided my appetite for more.

BARRICADE IS AVAILABLE ON DVD ON SEPTEMBER 25TH!

WHAT: On September 25th, BARRICADE DVD’s will be hidden throughout 25 cities across the US. Clues to the locations where DVDs are hidden will be sent out via Twitter and Facebook on the BARRICADE Facebook and Twitter pages. Fans can also check in via Foursquare and if they are in a location where DVDs are hidden they will be entered to win exclusive WWE merchandise!
WHEN: Tuesday, September 25th
WHERE: Location in a city near you. Check the BARRICADE Facebook and Twitter page.

Markets included in this:

About WWE Studios:
WWE Studios continues to strategically diversify its slate of films, which includes theatrical releases and direct-to-home premieres, under the guidance of President Michael Luisi. Upcoming films for WWE Studios include: Dead Man Down, which was co-financed with IM Global and will be distributed by FilmDistrict, starring Colin Farrell and Noomi Rapace; The Hive, which was co-produced with Troika Pictures, starring Halle Berry and Abigail Breslin; and No One Lives, which was co-produced with Pathé Films and premiered at Midnight Madness at the 2012 Toronto International Film Festival, starring Luke Evans and WWE Superstar Brodus Clay™. For additional information, go to www.wwe.com/inside/overtheropes/wwestudios

About BARRICADE:
Terrance Shade (Eric McCormack) takes his children on a holiday getaway to a cabin in the woods. But when a blizzard buries the house, the family finds themselves trapped and without communication. As the storm surges on outside, a sinister presence materializes. Unable to explain it, and unable to escape it, they quickly realize that maybe they haven’t locked the evil out…instead they’ve just locked it in. The film stars Eric McCormack, Jody Thompson, Connor Dwelly, Ryan Grantham and Donnelly Rhodes. Directed by Andrew Currie. Written by Michelbrent Collings. Available on DVD exclusively at Walmart on September 25th. For additional information, go to www.facebook.com/BarricadeMovie or www.BarricadeMovie.com