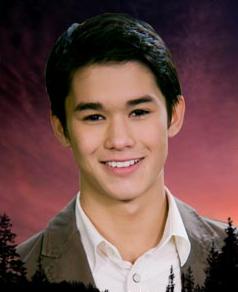 Mike Gencarelli: What would you say has been the coolest thing that has happened to you since joining “The Twilight Saga”?
Booboo Stewart: Well there has been some really cool things…but I think the best part has been the fans.  They make you these really cool handmade bracelets and in my room, my mom put these hooks up and I’ve got a bunch of them.  Fans are able to send them to me via my PO Box and I’ll wear them in magazines and stuff like that.  They are able to see me wearing them and I think that is really cool.

MG: I was watching some of the special features on the “Breaking Dawn- Part 1” Blu-ray and what was you say was the most challenging aspect of that shoot?
BS: The beach scene was soooooo cold.  Everyone was wearing these huge jackets and I was sitting there with my shirt off freezing.  I remember that any of the shots that were above my waist, I had blankets, sweatpants, shoes…it was freezing.

MG: What can we expect from “Breaking Dawn- Part 2”?
BS: I can’t give too much away 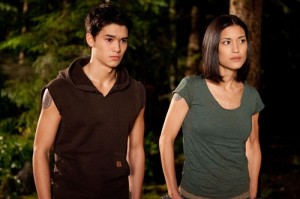 obvious, even though its a book and all.  You get to meet a lot of new characters in the second movie.  During filming actually, it very hard to tell who was in which film.  I can’t imagine for the AD and makeup people trying to figure out who was who.  There were so many cast members on set at the same time, since they were filming two movies.

MG: “Breaking Dawn- Part 2” looks to amp up the action from “Part 1”, how was the production?
BS: Since I starting with “Eclipse”, I think just having the different directors on set changes the whole vibe.  For the short time I was there for “Eclipse”, David Slade was very technical and he knew what he wanted.  When I got to work with Bill Condon, I worked with him a lot more and more personally as well.  He was more of an actor’s director.  He would talk to you and figure out what you are thinking in a scene and what you character was going through.  This was also with everyone, didn’t matter the size of your role.  So that was really different.

MG: Besides acting you also take roles in stunts and composing, tell us about that side?
BS: I have been involved with music since I started out.  Music is a really cool thing to record.  I think it is really fun and I figure I am in the movie, so why not do a song or something [laughs]. 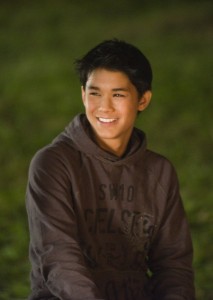 MG: You also created and illustrated the comic book “Millennium Man”, tell us about that?
BS: I love comic books and I love drawing.  I am drawing right now, as you can see.  I created this character a really long time about called “Millennium Man”.  He uses electrical force as his power. It is cool to see an idea that I had come to paper.  We will see what happens with it. Right now it is still being developed.

MG: How did you prepare for your role in the new film “White Frog”?
BS: I play a character named Nick Young who has Aspergers, which is a a form of autism. It was the most intense thing I have ever done but it was also the most fun I have every had. I was able to be very close with every crew member.   I am happy to get a chance to play a different character and not just playing the same ones every time.  Acting is fun because you get to play different characters. I did a lot of research by watching YouTube videos. I tried to get characteristics but everyone with Aspergers is so different.  Some can mild, some can be severe and there can be a mild case and severe case in one person. It was definitely challenging but also very rewarding.

One Reply to “Interview with The Twilight Saga’s Booboo Stewart”