Atreyu have shared the video for “Super Hero” from their 2018-released album In Our Wake. The track features appearances from Avenged Sevenfold frontman M.Shadows and Underoath drummer/vocalist Aaron Gillespie.

“Our song ‘Super Hero’ was written about what it’s like to be a parent and the vast amount of time, effort, energy, and hard work it takes to be a real-life superhero for your children,” the band says. “The song also has a broader meaning, especially given the current situation the entire world is dealing with. There are many superheroes out there who appear in many forms — namely the first responders, medical personnel, and health care workers who are putting others first as they work to fight COVID-19 and to save lives. We dedicate this song to them.”
Atreyu are working on their eighth album, due out via Spinefarm Records later this year.

APPEARING AT ROCK ON THE RANGE, CAROLINA REBELLION & MORE


New York, NY (February 13, 2017) –VOLBEAT announce today that they will be heading on the road for their new North American tour with Metallica and Avenged Sevenfold. In addition, the band will appear at top festivals including Carolina Rebellion and Rock On The Range.

VOLBEAT will also launch a special Rebels & Angels fan club presale on Wednesday February 15 at 10am EST. General on-sale begins Friday, February 17th at 10am EST. The tour kicks off on May 10th in Baltimore, MD at M&T Stadium, and the full confirmed itinerary can be found below. This marks VOLBEAT’s very first stadium tour with Metallica stateside.

The group is touring in support of their sixth full-length album, Seal The Deal & Let’s Boogie [Republic Records]—which claimed #4 on the Billboard Top 200 and made history as “one of the highest Top 200 Album Chart debuts by a Danish artist.”  In addition, the album features two songs which hit Top 5 at Active Rock radio “Seal The Deal” and “The Devil’s Bleeding Crown,” which spent over 10 weeks at #1. Check out Seal The Deal & Let’s Boogie Here.

VOLBEAT emerged from Copenhagen in 2000. Since then, they’ve tirelessly clawed their way to rock’s upper echelon with endless touring and a string of six beloved full-length albums. Recently, their 2010 album Beyond Hell/Above Heaven received RIAA Gold Certification which features hit singles “A Warrior’s Call” and “Heaven Nor Hell.” 2013’s Outlaw Gentlemen & Shady Ladies bowed at #9 on the Billboard Top 200 upon release marking the highest U.S. chart entry for a Danish Act since 1997. It also spawned the GRAMMY Award®-nominated“Room 24” [featuring King Diamond] and was certified Gold in Canada. They’ve been invited to support Metallica on the road worldwide in addition to show-stopping main stage turns at festivals such as Coachella, Download, Rock on the Range, KNOTFEST, and more. 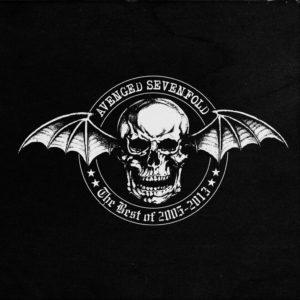 Warner Brothers has recently released a new “Best Of” double album featuring Avenged Sevenfold. The album titled “The Best of 2005-2013” features select tracks from the bands four albums with the label (City of Evil, Avenged Sevenfold, Nightmare and Hail to the King) along with three cover tracks and two previously unavailable songs from the bands eight year run with the famed label which are spread across two discs.

Having seen dozens and dozens of ”Best Off” albums come and go with little to no fan fair I was sort of hoping for a little more from Warner Brothers in regards to Avenged Sevenfold. However knowing the relationship between WB and the band was coming to an end in a not so pretty way we have this rather lackluster piece. Pretty quickly I noticed something sounded a little off with the tracks as they all seemed a bit thin and not as powerful as each track sounded on its original release. At first I had thought maybe it was just my speakers however re-listening to the album on a different system yielded the same results. Disc one of the set features three tracks from “City of Evil”, five tracks from “Avenged Seven Fold”, three from “Nightmare” and two from “Hail to the King”. Basically they stripped away some of the more unique pieces on the bands catalog and went straight for all the radio friendly stuff listeners have heard a million times over by now. What fans of the band might enjoy most is disc two of this release as it features three cover tracks pulled from two tribute records the band was a part of along with the tracks “Carry On” which was featured in the video game “Call of Duty: Black Ops II” and “Not Ready to Die” featured in the “Call of the Dead” video game. These two tracks along with “Walk”, “Flash of the Blade” and “Paranoid” were certainly the shining stars as they are not tracks heard as often as those found on disc one.

I would have thought that with the invention of ITunes and other digital media services that greatest hits releases like this would be a thing of the past or at-least reserved for late night info-mercials. Yet there are still handfuls of them released year after year where they are doomed to take up shelf space. Avenged Sevenfold “The Best of 2005-2013” seems to be another one of those releases as it really offers little to longtime fans of the band. Yes you get a hardcopy of a few rarer tracks but, how many people out there are rocking a Discman these days or don’t have some sort of mobile hook up for the media player where they would really need a hard copy? My advice, skip this release as all these tracks can be found on various streaming and download sites. You will not be missing anything by not purchasing a hardcopy of this release as even the packaging is a simple as it can be offering nothing new or original to fans of this era of Avenged Sevenfold.