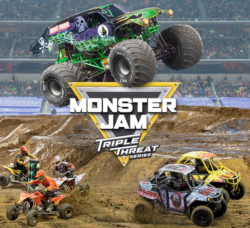 Orlando, FL — April 3, 2018 — Feld Entertainment, the worldwide leader in live family entertainment, announces that tickets for the all new Monster Jam® Triple Threat Series will be available on pre-sale this week for the August 18, 2018 tour stop in Orlando, FL at Amway Center. The new season will bring motor sport fans to the edge of their seats with adrenaline-charged, high-flying, four-wheel excitement that is fun for the entire family and is unlike anything ever seen at the stadium style events.

Monster Jam has been coming to Orlando to the Camping World Stadium for more than 30 years. The Triple Threat Arena Tour debuts in Orlando for the first time and is an entirely different format than Orlando fans have seen at the stadium. This upcoming tour will feature eight of the most talented Monster Jam drivers competing on three vehicles during the competition. Orlando fans will witness a fierce battle for the championship with each competitor using customized high-powered vehicles: Monster Jam Speedsters, Monster Jam ATVs and the famous Monster Jam trucks closer to the action than ever before. The eight athletes all competing in individual racing and skill competitions and overall event championship are:

Media Mikes is excited to be provided a special discount for our readers: Save $5 off select seats with code 5BLOG. Not valid on VIP seating. Hurry for the best available seats! Code expires August 17, 2018.

Monster Jam is one of the only sports where male and female world-class drivers, some generational rivals, are equals competing for the same championship on the same track. Following racing, just like the show at Camping World Stadium, Monster Jam fans in every city will have the chance to vote for the truck winner in the donut, wheelie and freestyle competitions by real-time, in-arena fan voting on their smartphones. This tour features two female athletes among the eight total competitors.

Tickets will go on pre-sale to Feld Preferred members on April 10, 2018 at 10:00AM ET. The public on sale will take place on Tuesday, April 17, 2018 at 10:00AM ET. All tickets are reserved. Pit Party passes are available for purchase in advance as well via the Venue Box Office, Ticketmaster.com or 800-745-3000. Subject to facility fee, plus convenience and handling charges. Amway Center is located at 400 W Church St, Orlando, FL 32801. For group ticket sales and information, call 866-248-8740, or e-mail
groupsales@feldinc.com. To be one of the first to know about any other promotions and gain access to the best seating in the arena, sign up to become a Feld Entertainment preferred member at FeldEntertainment.com.
For more information on a Monster Jam near you, please log onto MonsterJam.com or follow us via our social channels: Facebook, Twitter, Instagram and YouTube.

I am a Feld Entertainment Blogger Ambassador, and in exchange for my time and efforts in attending shows and reporting my opinion within this blog, as well as keeping you advised of the latest discount offers, Feld Entertainment has provided me with complimentary tickets to Feld shows and other exclusive opportunities. 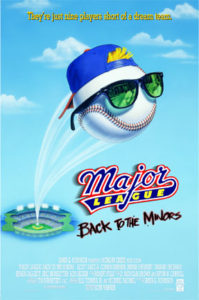 There is a long history of athletes turning to acting after their playing days are over. In fact, many of them get a jump start by acting while they’re still in the midst of their careers. Most of them have been forgettable, but some athletes have gone on to become serious actors or at least leave a lasting impression upon the landscape of popular culture. This is the list of the best athletes turned actors.

Okay, so maybe calling Uecker an athlete is a stretch when you look at his career .200 batting average, but the man did last six seasons in Major League Baseball. He will always most famously be remembered for his hilarious announcing in the Major League movies.

Weathers is most widely known for portraying Apollo Creed in the Rocky Franchise. Before he became famous for fighting and training Rocky Balboa, Weathers played linebacker for two seasons at San Diego State, 7 games for the Oakland Raiders and a couple years in the CFL.

Brown’s name is often thrown around in the lists of best athletes in history. He is the only man to average over 100 yards per game for his entire NFL career. After his playing days were over, Brown turned to acting. His most famous role was in The Dirty Dozen.

Although kids from the 80’s will undoubtedly remember Olsen most from his role as Ingalls’ family friend Jonathan Garvey on “Little House on the Prairie,” he was one of the best defensive tackles in the history of football. He made the Pro Bowl the first 14 years of his 15-year NFL career, which is a Pro Bowl selection streak that is only matched by Bruce Matthews, Tony Gonzalez and Peyton Manning.

Weissmuller won five gold medals and a bronze for swimming in the 1924 and 1928 Summer Olympics. He then went on to portray Tarzan in 11 films, starting in 1932. Following that, Weissmuller starred in 13 movies as a famous Asian hunter called Jungle Jim.

Karras was a star offensive lineman for the Detroit Lions over 12 seasons in the NFL. He went on to star in many TV shows and movies, most famously as Mongo in Blazing Saddles and George Papadopoulos on “Webster”.

Most recognizable by Millennials for the Internet memes referencing his legendary feats, Norris was an action star who is most famously known onscreen for fighting Bruce Lee in Way of the Dragon and portraying the title character in “Walker, Texas Ranger.”

Reynolds was a star fullback coming out of high school, but he hurt his knee at Florida State in his sophomore year and never fully recovered. He turned to acting and became one of the biggest movie stars of the 1980s in films like Deliverance, Smokey and the Bandit and The Longest Yard.

The most famous kung fu movie star ever is also considered by many to be the best martial artist of all time. His most famous films were The Big Boss, Way of the Dragon and Enter the Dragon.

A star so big he is instantly recognizable from his first name alone, Arnold is one of the biggest box-office stars in Hollywood history. In films such as Predator, Kindergarten Cop and The Terminator franchise, Schwarzenegger delighted audiences. Before he became an action hero, Schwarzenegger initially gained fame as one of the most successful bodybuilders ever. He won the title of Mr. Olympia seven times.

Media Mikes is proud to welcome Adam Walter. Adam is recently out of college and makes his home in New York City. His love of sports led to he and some friends starting an Internet blog. You can read more of his work at www.usssportsmachine.com. Welcome aboard!