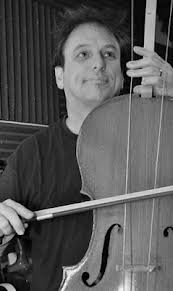 Dren McDonald is a musician/composer since and runs the website, nerdtracks. He currently also creates music and sound design for video games. Recently he came together to form a band, The String Arcade, and has an album coming out on February 11th. “The String Arcade” spans a few decades in video game history from arcade classics including “Galaga”, “TRON” to 8-bit eras with “Legend of Zelda” to more recent hits with “Portal 2” and “Minecraft”. Media Mikes had a chance to chat video games with Dren and his album.

Mike Gencarelli: How did The String Arcade come together?
Dren McDonald: The creation of The String Arcade didn’t come from one singular “really big idea”, but more like a recipe of several idea ingredients that came together at the right time. The initial spark came from a personal challenge. After working on a lot of client music for the past few years, I wanted to really work on a project that was meaningful to me and that reflected the idea “what music would I make right now, if I could make anything”. Clearly I wasn’t thinking about doing an album of cover songs with that initial thought.

However I’d always been completely obsessed with the music from the film Stranger Than Paradise, by John Lurie. I bought the soundtrack album back when the film came out, hoping that the Screamin’ Jay Hawkins tune, “I Put a Spell on You” would be on there. It wasn’t. But the first side of the record was the entire string quartet soundtrack from the film, and it’s one of the few pieces of music that I continue to listen over the years, ever since the first listen. So I wanted to do something like Stranger Than Paradise: a bunch of string quartet music.

So I started working on this idea, and the first tune I completed was ” Optimism For an Improvement in The John Situation” (a reference to the fact that Lurie hasn’t been playing/writing music due to an illness). This tune served as a blueprint for the other music, and I began to start rearranging some of my own music from games…and in all cases, appending and expanding all of those pieces with the intention of having them played by musicians.

Concurrently, a local project called the Alameda Music Project (alamedamusicproject.org) was starting to raise funds in order to begin their after school music program, a K-5 El Sistema based classical music program with strings, chorus and percussion. So we decided to make this ‘recording project’ a fundraiser, with all sales going to support the new music program. But a CD of all Dren McDonald chamber music wasn’t going to move the fundraising needle too much, so more thought was put into the project.

I started listening closely to some of my favorite game music from my youth (Altered Beast, Legend of Zelda, Galaga) and wondered how those might sound if arranged for string quartet. And how might they sound by using Stranger Than Paradise as a model for the mood? It was a clash of very disparate worlds, but the juxtaposition was one that got my musical brain excited. Soon after we launched the Kickstarter.

MG: How did you choose which games and specific songs where chosen for the album?
DM: I chose games that 1) I was a fan of, 2) that I could see fitting into this musical blueprint some way, so that the recording didn’t come off as a novelty album and 3) games that would reach out to kids with the hopes that they’d be inspired to play music. The recording is a fundraiser for a music program, so some thought was given to the song selection with that in mind as well.

Back to this “musical blueprint” idea, I did want to pick songs that would lend themselves towards being moved, twisted, rearranged and manipulated in a way that spoke to me. Really creative music arranging can be just as rewarding as composition, (in some of these charts there’s a lot of added composition), so I didn’t want to simply ‘cover’ the music, but inject it with emotions or musical turns that moved me.

MG: What is it about 8-bit games and their music that still resonates today?
DM: Sometimes we hear discussions about how 8-bit or 16-bit games had more memorable music than games of our current generation, and I think that’s largely due to the fact that game design has changed so radically due to technology. With the NES, you basically had music or you didn’t. There was no ‘ambience’ really, so it was on or off. So it ‘had’ to be memorable, or catchy so that it wouldn’t make us insane while we played. So if we played Legend of Zelda, or Ecco or Altered Beast in our youth, that music has definitely carved a way into our brains and made a home there. Last year I remember play the Tron arcade machine, which I hadn’t played in many years, and was astounded at how well I remembered all of the little musical pieces that played during game play (especially when you die!). I’m no psychologist, but I think there’s something about that association with a game that comes from playing it, and having a great experience that sticks with you. Hearing the music outside of the context might just bring back those good feelings.

MG: What games didn’t make the cut from this album?
DM: There are certainly games with wonderful soundtracks that I love that I considered…Journey, Dear Esther, Bioshock (1). But I didn’t feel like the contribution that I might make to that music would resonate. As I said, I wanted run these tunes thru my ‘blueprint’ and after thinking about some of this other music, I’m not sure I would have been successful with that approach. When you are interpreting music that had been previously represented by synth or chip sounds, there is a little more freedom there. Even in the case of something like Outlaws or Plants Vs Zombies, the change in instrumentation and musical style was enough to unlock that freedom. Those other soundtracks I mentioned were already created with live string players, so any attempt to cover them in the manner that I approached the other music would have probably fallen flat. Listeners have already heard those soundtracks with strings, and a ‘new’ version would likely be judged as an inferior one.

MG: Tell us about what happens with the proceeds of the album?
DM: 100% of the proceeds goes to the Alameda Music Project (alamedamusicproject.org) with is an after school, K-5 music program for strings, percussion and chorus. It’s a tuition-free program in a Title 1 school, so that kids who might not be able to afford to study music, will have that chance. It’s 5 days a week, after school care (homework, snacks and music) and it’s based on the El Sistema model, which was the music program that began in Venezuela 40 years. The same program that Gustavo Dudamel (creative director/conductor of the LA Phil) had gone thru as a child.

MG: Can we expect follow-up albums or a tour in the future?
DM: Good question! There are no tour plans, but depending on how this record does, and how the music program does this year I’m sure we’d love to do a follow up. There will be a CD release party, with the quartet, and lots of video games to play (include arcade machines, old consoles and several indie game studios who will be there showing their games.) That is March 7th at Rhythmix in Alameda, CA and we are planning to stream video from that show as well. We’ll put details on thestringarcade.com 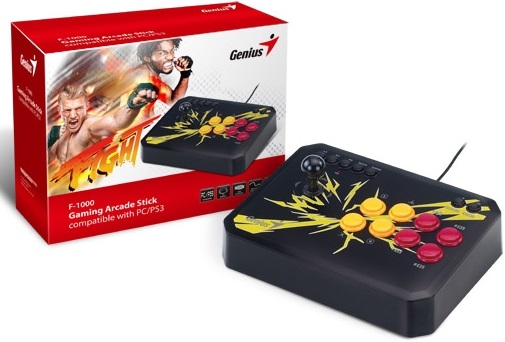 I grew up when arcades used to be very popular and there was nothing like coming home from school and spending the afternoon at the arcade. Unfortunately those days are passed use with today’s high-def video game systems and vanishing arcades. Well, Genius has an answer to your prayers for all us hardcore gamers by bringing the arcade-quality control home for use with your PC or PS3. The new gaming arcade stick, Arcade F-1000 is a great way for us hardcore gamers to get that arcade feel while being in the comfort of our own homes.

This great item can be used on today’s games like “Street Fighter”, “Tekken” and even the “Call of Duty” series. Like I said it works with both PS3 and PC systems, even with Windows 8 operating system (Sorry XBOX you miss out here). I have to admit playing with this brought me back to the old days. It delivers the classic arcade feel yet it is so integrated with today’s games that it works so well.

Now let’s get to the details of the actual device. This comes with a standard 4-axis 13-button joypad and supports turbo function, so you have more precise control that an arcade layout provides and helps you get to the next level while playing action and shooting games. I have to admit, I have always been playing games on the PC but this really gives a great transition to crossing over to the PS3 with this arcade stick. What I like most is that it is not a cheap piece of plastic, it has a quite durable and sturdy metal base. It is not too heavy though weighing in at 1.866 kilograms.

The Arcade F-1000 lastly comes with 3 meter cable and 1 meter extension cable if you need the extra room and this really benefited my setup quite well. I remember my old NES controller with its 12 inch wire and we used to have to sit right in front of the screen before the days of wireless. This great item is now available in the US and Canada for the suggested retail price of US$59.99. I think it is worth every penny and will deliver a new or retro video game experience for sure.