Carey Means is known for voicing the character Frylock  in “Aqua Teen Hunger Force”, renamed this season to “Aqua Something You Know Whatever”.  With the show going on 12 years and over 100 episodes, Media Mikes took out some time to chat with Carey about voicing Frylock and what he enjoys most.

Mike Gencarelli: Over 100 episodes, what do you to keep voicing Frylock fresh?
Carey Means: They usually call me the day of and say can you be at the studio at 2pm and it’s 1pm. I think on my feet! I improv. This show is actually 60% improvised. I just keep coming to work until they fire me and they did once [laughs].

MG: You ever get recognized for voicing the character?
CM: When I was homeless between 2008-2009 for seven months, stuff happens, I was on the train, and I don’t wear a sign saying that I am Frylock. Though today I am wearing a Mooninites shirt, but that is a different story. So I am on this train car and it is filled with Stromtroopers from a parade and all of the sudden, I hear “Frylock” called out and it was the Emperor. I gave him a fist-pound and I nealed before him and he told me to “Rise! Darth Means”. True story. I play a lot of video games online under the name “Darth Means”.

MG: Besides Frylock, you ever voice any other characters throughout the seasons?
CM: I am just Frylock, dude! Actually I also voiced a tree also when Carl was getting his back skin ripped off. Besides “Aqua Teen”, I got asked to try out for a few characters on “Squidbillies” but they used someone else of course.

MG: How long does it take you to record one entire season?
CM: It depends. They might call me for one show and it might take only 20 minutes and I might only have one line. They will also call me something for four shows and I like those since that means more money.

MG: When you record are you with anyone else?
CM: Usually I am with Dave Willis. Matt is on the phone. Dana does his stuff seperately.

MG: What can we expect from the show going forward?
CM: I hope this show lasts longer than “The Simpsons”. They need to do another movie. I hope Frylock isn’t abroad again, since I wasn’t a fan of that. We need to start a viral bug to get that made. 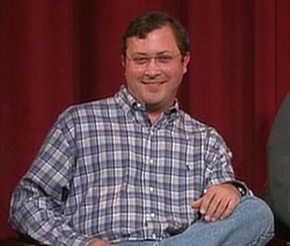