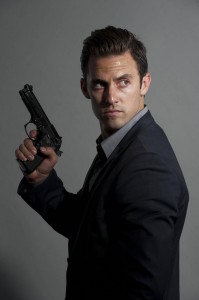 Milo Ventimiglia is the executive producer and star of Crackle’s newest original series “Chosen”. Milo is know for his work in TV with his playing Peter Petrelli on the NBC television series “Heroes”. In “Chosen”, Milo plays Ian Mitchell, a husband, father and lawyer who awakens one morning to discover a mysterious box on his doorstep containing a loaded gun and a photo of a stranger he must kill within the next three days. Ian quickly learns that if he doesn’t kill this man he will be killed himself along with his daughter who is being held hostage. A heart pounding thriller, Chosen features six 30 minute episodes which premiered on Crackle.com and all Crackle platforms Thursday, January 17. Media Mikes had a chace to chat with Milo about this new series and what we can expect with his character.

Mike Gencarelli: How you got involved in this project?
Milo Ventimiglia: I got a script from Ben Ketai and it was great. It was awesome. And I was a huge fan of his and I worked with Crackle before developing stuff and I was just like, these guys are great. And I kind of – into the digital space and what it affords creative types and what we get to do and play around with space and then enjoy its reach. So cool story, cool release, great character, yes, I’m in.

MG: What do you love about the viability in potential shows on the internet like Chosen and how that differs from TV or film?
MV: Man, I love the reach, you know, I’m just so excited about digital because of the reach. The actual releases sometimes some countries don’t get movies. Sometimes, they’re in and out of theaters, TV — maybe you don’t have the channel, maybe you don’t have pay cable. Maybe, you live in a remote part of the world that just doesn’t have what the network is showing or studio is putting out. Digital I kind of feel like anybody can access it, anybody can get to it. And for me being a part of projects like Chose, you know, working with Crackle and just being a guy who’s been in the digital space for kind of a long time now. I know it’s something that I’m going to continue to do and hopefully as it builds and the profile builds and people understand that, look, you’re going to get the same quality on digital as you can in a movie theater if you actually have a bandwidth for it then great, you know. So I love digital, I’m in to digital.

MG: What were some of the initial acting challenges steeping into the Ian role?” 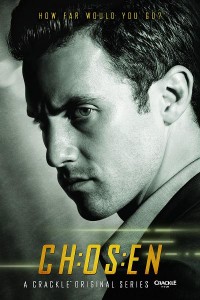 MV: Wow. The initial challenges? I mean, first being a father. Like I’m not a dad myself yet, you know, I’ve got a lot of good friends with kids and a nephew and, you know, that’s all cool and exciting but I think that kind of real life – that weight of real life of having a daughter, having somebody you care about so much like they’re you’re blood. You and a woman created them and that fear of if they are gone, if they are taken, if they are missing. I think that was kind of the – the very first and foremost in my mind was Ian’s connection to his daughter and how strong that is and how much that propels him through the situation that – of the game of what he has to go through. As well as, you know, here’s a guy who works in a an office and he’s told to kill someone for sport, for a game. And it’s like how do you – you know, it’s a question that kind of comes up throughout the course of the show, I know Deidrch’s character asks it, Ian asks it. It’s like how can someone expect you to do that. So I think that – really connecting to that idea of the reality of it, just how much human beings really don’t have that instinct or want to do. That was something that I was trying to tap into like the reality of the situation and believe it and live it as much as I can.

MG: How Ian changes or evolves as the story progresses?
MV: Ian starts out a bit mild mannered. He’s a guy that works in a law office. He holds a pen. He wears a suit and tie and he kind of devolves and evolves into this man who has to act a little bit more on physical instinct given situations that come his way. If a guys coming at him with the silenced gun he’s got to run. If he gets shot he has to kind of fight back. As well as he still has to play that chess game with the people that are involved with the watchers — these watchers that are in control the game. I think it’s kind of a testament to who Ian is a human being where he is a rational, functioning in society man but at the same time he’s able to switch to an instinct that is maybe a little unnatural for people that are, you know, living in a world of suits and ties and writing with pens all the time and legal society. So I think for me it was an awesome arch that Ben gave me as an actor to turn into – to become this man who is really wholly trying to just protect his family by any means possible, you know. It’s like his discomfort at the contents of the box when you first meet him and then kind of throw a little comedy slant at how comfortable he is with the 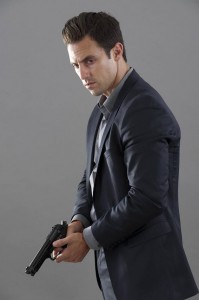 contents of the box, you know, a little later on in the show, so. Yes, I think for me it’s the evolution of who he becomes.

MG: How you go into the mindset of the paranoia?
MV: Wow. You know, a few years ago my mother asked me – I did this movie where I played a really, really deplorable person. The movie’s called The Divide. And afterwards my mother asked me if something happened to me as a kid that she didn’t know about. I said, “What do you mean Mom?” She said, “Well you were such an evil, horrible person, how – did something happen to you that we don’t know about?” I’m like, no, not at all Mom, I’m an actor, like that’s what we do. We just act. So I think the paranoia is it’s just kind of a like a matching your worst fears and playing to them. You know, I like to say let the wheels come off, see what happens, just go for it. I think at times actors are standing a bit naked with our emotions and we have to. We have to be able to stand there and deliver anything, you know, happiness, sadness, paranoia, fear, victory, you have to be able to allow those things to just kind of flow out of you. For me it was no different. The paranoia, I think is just like, all right, I don’t want to act paranoid. I’m just going to be paranoid, how’s that?