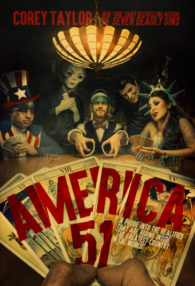 America 51: A Probe into the Realities That Are Hiding Inside “The Greatest Country in the World”
Author: Corey Taylor
Da Capo Press
Hardcover 256 pages

In America 51: A Probe into the Realities That Are Hiding Inside “The Greatest Country in the World”, Slipknot/Stone Sour lead singer Corey Taylor directs his signature combination of humor and outrage at today’s America, sparing no one along the way. Taylor doesn’t shy away from thorny issues as he draws a brutally honest portrait of his country, outlining the good, the bad, the unflattering and the patriotic. Whether it’s politics or social media, race or pop culture, religion or reality TV, “America 51” digs deep into the roots of contemporary America.

The 4th book from singer turned best-selling author Corey Taylor titled America 51: A Probe into the Realities That Are Hiding Inside “The Greatest Country in the World” is easily the brashest in your face collection of rants from the out spoken front-man. Having struggled my way through Taylor’s last two literary offerings l was a touch apprehensive about subjecting myself to another 256 pages of rambling. However being a long time fan of both Slipknot and Stone Sour I was willing to still give this book a shot. Within the first several chapters I could see that this book was going to be just like the others as Taylor becomes so wrapped up in his thoughts that he quickly loses site of the actual. I found this to very distracting and despite Taylor’s off the wall comedic jabs at society and his take on the current political climate there were just too many thoughts going on at one time causing the book to come off as very unorganized and poorly edited.

If you liked Corey’s previous three books then there is no doubt in my mind that “America 51” will fit right in with your collection as by now you have become a custom to the author’s chaotic style. However, if you are looking for this to be your first exposure to Corey Taylor outside of his music then you may want to hold up and check out some of his earlier works first.

“Doctor Who” is bigger than it ever has been.  With news of the 12th doctor recently released and the upcoming 50th anniversary episode, things have never been hotter for the series. So that is a perfect time to release “Spearhead From Space (Story 51)” on Blu-ray for the first time. In fact it is the first of any classic Doctor Who episodes to be released in this format. This was the first story of Season 7 of Doctor Who and also was the first to feature Jon Pertwee as the Third Doctor. We also get introduced to Caroline John as the Doctor’s new companion, Liz Shaw.  “Spearhead from Space” is a great story in the series and this is a must buy for any “Doctor Who” fan for sure. I hope that BBC has plans for future stories in this format.

Official Premise: Exile! The Time Lords have banished the newly regenerated Doctor to Earth. But the Doctor isn’t the only alien to have arrived, as a swarm of meteorites have crashed into the sleepy English countryside, bringing with them a terrible new threat to mankind. As the Nestene plan takes shape, UNIT, the Doctor and his newly appointed scientific advisor, Liz Shaw, race against time to stop humanity being replaced by a terrifying plastic facsimile race.

If you are curious as to why there isn’t more classic “Doctor Who” episodes being released on high-definition on Blu-ray, that is because “Spearhead From Space” was the first o be shot entirely on film, due to BBC strike. It was also the first classic story to be presented in full color. It has been restored from the original 16mm film elements and scanned into a beautiful high definition transfer.  It looks amazing on Blu-ray and within its original television 1.33:1 aspect ratio. The audio is also impressive with a sharp DTS HD-Master Audio 2.0 track. There is also a few decent special features included on the Blu-ray including “A Dandy and a Clown”, “Carry On: The Life of Caroline John”, “Title Sequence Material” and “Restoration Comparison: Digitally Remastered Picture and Sound Quality”. So this is a well-rounded release, another solid release from BBC.

James Gandolfini, whose performance as mob boss Tony Soprano in HBO’s seminal series “The Sopranos” earned him multiple Emmy Awards, has passed away in Rome after an apparent heart attack. He was 51.

The New Jersey born actor first made an impression when he made his Broadway debut in the revival of “A Streetcar Named Desire” in 1992. I was fortunate to see the show during it’s limited run and Gandolfini more than held his own against top billed stars Alec Baldwin and Jessica Lange. Film fans will remember him as the hit man assigned to kill Patricia Arquette in Tony Scott’s adaptation of Quentin Tarantino’s “True Romance.”

Memorable supporting performances in films like “Get Shorty,” “A Civil Action” and “Fallen” led him to what would be the role he will most be associated with, Tony Soprano. His work earned him six Emmy nominations (and three awards) as well as four Golden Globe nods (with one win). He took advantage of his new popularity by getting lead roles in such films as “The Last Castle,” “The Taking of Pelham One, Two Three” and last year’s Best Picture nominee “Zero Dark Thirty.” He also gave an amazing performance (my words) giving voice to the character of Carol in the film adaptation of “Where the Wild Things Are.” He also returned to Broadway in 2009, earning a Best Actor in a Play Tony Award nomination for “Gods of Carnage.”

He was seen on screen earlier this year in the Steve Carell comedy “The Incredible Burt Wonderstone” and, according to the Internet Movie Data Base, has two more film projects being released posthumously.