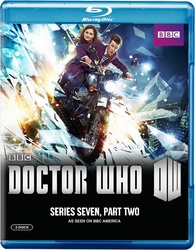 “Series Seven, Part Two” picks up with Matt Smith in the role as the Eleventh Doctor and Jenna-Louise Coleman as his newest Companion, Clara. I have to admit, I absolutely love the new companion.  She is easily my new favorite from the series reboot. She is so cute, sweet and very clever. She also has a great back story. The episodes included are: “The Bells of Saint John”, “The Rings of Akhaten”, “Cold War”, “Hide” , “Journey to the Centre of the TARDIS”, “The Crimson Horror”, “Nightmare in Silver” and “The Name of the Doctor”. The strongest episodes this season are easily “The Rings of Akhaten” and “The Name of the Doctor, the finale, which leads right into the 50th Anniversary episode…man November cannot come any sooner!  Overall one of my favorite seasons!

“Doctor Who: Series Seven, Part Two” Official Premise: The Doctor kicks off this new run of adventures by searching for his companion Clara – an Impossible Girl he’s already lost twice. Together they find themselves battling monsters on distant alien planets, trapped in a Russian submarine with a deadly passenger, chasing terrifying ghosts, delving into the heart of the TARDIS, facing the Crimson Horror in Victorian Yorkshire, and coming face to face with an army of upgraded Cybermen. The action grows and the Doctor’s oldest secret threatens to be revealed as the world’s longest running science fiction series builds toward its explosive 50th anniversary.

Also being the released the same day by BBC is “Doctor Who: The Snowmen”, which is the 2012 Christmas special.  It is also the first episode to star Jenna Louise-Coleman officially as The Doctor’s companion.  She originally appeared in the first episode,  “Asylum of the Daleks”, of the seventh series. The special also co-stars Richard E. Grant as Dr. Simeon, who also returns in finale of “Series Seven, Part Two” as the Great Intelligence. Also fun fact is that the voices of The Snowman is done by Ian McKellen and Juliet Cadzow as the Ice Governess. I thought this episode was one of my favorites of the Christmas specials.  It was also the first of them that contains continuity to the series episodes, which made me like it even more.

“Doctor Who: The Snowmen” Official Premise: Christmas Eve 1892 and the falling snow is the stuff of fairy-tales. When the fairy-tale becomes a nightmare and a chilling menace threatens Earth, an unorthodox young governess, Clara, calls on the Doctor for help. But the Doctor is in mourning, reclusive and determined not to engage in the problems of the universe. As old friends return, will the Doctor really abandon humankind or will he fight to save the world – and Christmas – from the icy clutches of this 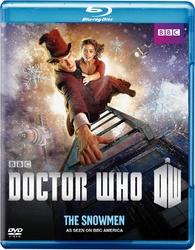 Like usual BBC Home Entertainment is delivering this series and special with a solid 1080i transfer. As much as I would have loved to have full HD, these episodes look damn good. They also sound amazing with there DTS-HD 5.1 track on both releases. The special features are good but not outstanding like in past releases. ”Series Seven, Part Two” only has two extras included. There is a short prequel to the first episode in part two “The Bells of Saint John”. There is also a featurette about the characters “Clarence and the Whisperman”. On “The Snowman” release, the special features are a little better, including two prequel to “The Snowmen”, “Vastra Investigates” and “The Great Detective”. Lastly there is a behind-the-scenes look on the episode called “Clara’s White Christmas”. Good features, just not enough to make it worth it unless you are a die-hard fan.