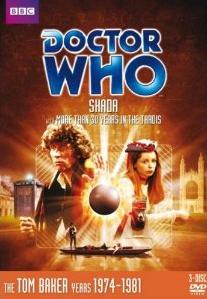 “Shada” is my first experience to Doctor Who prior to the 2005 revival. It probably isn’t the best idea to start with an story 109, which is half way through The Tom Baker Years 1974-1981. This DVD features the legendary unfinished Fourth Doctor story, which is newly restored from original film negatives and studio recordings with 1992 linking material from Tom Baker, which fills in the blanks from the missing material. This show was intended to close the 17th season of the show was in 1980 and was never shown on TV. I appreciate the fact that this is finally being released for all the Doctor Who fans. Though if you think that this release is cool to own wait till you see the TWO discs, that’s right TWO discs of special features. Easily worth the purchase alone.

Official Premise: Written by Douglas Adams as his final contribution to Doctor Who, Shada was envisaged as a Time Lord story without a Gallifreyan setting. It sees the Doctor bringing Romana to present-day Earth to visit Professor Chronotis, an elderly Time Lord who absconded from Gallifrey and now lives a quiet academic life at St Cedd’s College in Cambridge. Also seeking Chronotis is a scientist called Skagra who has a device, in the form of a floating sphere, with which he intends to steal the Professor’s mind and thereby learn the location of a book entitled The Worshipful and Ancient Law of Gallifrey. Skagra eventually succeeds in obtaining the book, which has been borrowed from the Professor’s study by a student named Chris Parsons. He then kidnaps Romana and hijacks the TARDIS.

On the first disc, the special features focus are with commentary. The first feature is “Shada – BBCi/Big Finish Version” is DVD-ROM content only, which is an animated radio/webcast version with Paul McGann as the voice of the doctor. There is no commentary track included but there is info text option, which is quite entertaining to read. The second disc focuses more on featurette based extras. The first is “Taken Out of Time: The Making and Breaking of Shada”, which includes interviews from Tom Baker, Daniel Hill (plays Chris Parsons, Pennant Roberts and more. “Shada: Now & Then” looks at the locations from the shoot from 1979 to 2012. “Strike! Strike! Strike!” is a new extra with interviews from Tony Lennon (ex-president of BECTU union), Nicola Bryant (who played Peri Brown) and looks into the strikes that caused this series an major problem. “Being a Girl” is narrated by Louise Jameson (who played Leela) and looks into the female companions. Lastly there is a Photo Gallery.

The third disc is where the meat is for this release. Besides “Shada”, the star is the 90-minute documentary from 1995 called “More Than 30 Years in the TARDIS”. This is highly recommended for all Whovians. Next up is “Remembering Nicholas Courtney” is a feature looing into Courtney’s roles and is moderated by Michael McManus. “Doctor Who Stories – Peter Purves” looks into his role as Dr. Who’s companion Steven Taylor in various Dr. Who series. “The Lambert Tapes – Part 1 & 2” is an in depth interview with the actor. “Those Deadly Divas” focsues on Kate O’Mara, Camille Coduri and Tracy Ann Oberman. O’Mara. Lastly there is a Photo Gallery for “More Than 30 Years in the TARDIS” and also a hidden Easter Egg.