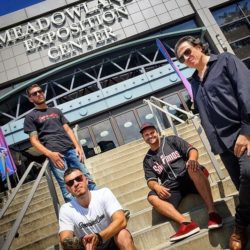 Time Immemorial, Famous Signs and Michael Mota present SopranosCon, the first-ever “Sopranos” themed convention, to be held at the Meadowlands Exposition Center in New Jersey on November 23rd and 24th, 2019.

Visually inspired by the Feast of St. Elezar, SopranosCon presented by East Commerce Solutions, is a fan convention unlike any other. Billing itself as “for the fans, by the fans,” SopranosCon will feature a once-in-a-lifetime reunion of key cast members, including Tony Sirico, Federico Castelluccio, Vincent Pastore, Vincent Curatola, David Proval, and over 30 supporting cast members, with many more special guests to be announced in the coming days.

“In a nutshell, this is The Sopranos meets New York Comic Con. However, our event is going to be much more than pictures, autographs, and vendors,” said Daniel Trader who runs @TimeImmemorial_, a creative Instagram page that boasts the largest Sopranos fan network on social media with over 225,000 combined dedicated followers.

Guests of the two-day convention will be able to celebrate the 20th anniversary of the series by showcasing Italian culture in New Jersey with food, drink, music, comedy, and show-related businesses (such as Holsten’s Ice Cream, a sponsor of the event). There will be fan art galleries, exhibits, Q&A’s, trivia, contests, games, and more.

“This event will be an experience no true fan will want to miss,” said Joe Fama, owner of Famous Signs and a co-presenter of the event. “We have spent years designing sets, exhibits, and more for this event.  There will certainly be something for everyone.”

In addition, an accompanying documentary commemorating the 20th anniversary of the hit HBO show will be released after the event.  The as-yet-untitled documentary will focus on three superfans — Michael Mota from Lincoln Rhode Island, Daniel Trader from Baltimore, Maryland and Joe Fama from Long Island, New York — who came together to give every Sopranos fan the opportunity to celebrate history. The documentary will also feature many key cast members telling “their story” and other exclusive behind-the-scenes footage of the Con.

Federico Castelluccio, better known as Furio Guinta on The Sopranos, has been chosen to narrate the documentary.

“When the first season came out, I was a huge fan myself.  I told my agent that I had to be on the show.  Having the opportunity to be a part of SopranosCon and celebrate with the fans is an amazing opportunity.  I am honored to be a part of this documentary, and I am excited to showcase what a few fans can do when they have a passion for something,” he said, exclusively.

“I can’t put into words the amount of support we have received for SopranosCon.  People all over the world have reached out to us and are coming to the United States for the first time for our event.  This show touched so many people and has left a mark on their lives forever,” said Michael Mota, founder and CEO of Skyline at Waterplace, and one of the key organizers of the event.  “I have thrown several Soprano themed events but this is something much larger. This is truly for the fans, by the fans.”

Tickets are on sale now at www.sopranoscon.com. For a limited time, fans can enter the promotional code HipHopGamer to receive 10% off all ticket packages. 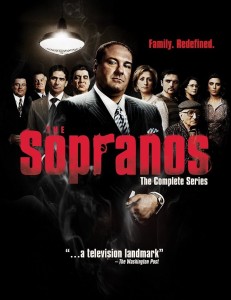 Every once in a while, a show comes along that changed television. “The Sopranos” was one of those shows. It built HBO to what it is today. The series is respected as one of the greatest television series of all time…and I easily agree. I remember dating back to 1999 watching the very first episode and being completely hooked from the start. During that time, I was hooked on mobster films like “Casino” and “Goodfellas” (in fact this series shares 27 actors with the 1990 Martin Scorsese gangster film), so this show was an epic TV version of those films. The cast is just simply outstanding including  James Gandolfini, Lorraine Bracco, Michael Imperioli, Tony Sirico and numerous others. I miss this show and I miss James Gandolfini but at least now we have the complete series available in one collection on Blu-ray.

The special features are great even though alot of the content is ported over the previous DVD releases. There are 25 audio commentaries, which sounds amazing but some of good and some are not. I picked a few hear and there on some of my favorites and I realized that very quickly. Other than that there are a bunch of rather short featurettes spread across each of the 27 discs. Some of the highlight extras ported over is a nearly 80 minute interview with creator David Chase by Peter Bogdonavich, which discusses the series in-depth. There is also a decent featurette focusing around “The Music of The Sopranos” with David Chase, Steven Van Zandt and Dominic Chianese.

The main draw for the special features is easily the 28th disc, which offers all new high definition bonus content, including a 46-minute retrospective, two round table discussions between David Chase and members of his cast and crew, a 2-part interview with Chase, and deleted scenes for all 6 seasons of the series. This Blu-ray exclusive content runs about three hours and is worth the purchase of the release itself. “Defining a Television Landmark” is a 45 minute look into the effect this series had a television. “Supper with The Sopranos” is a 75 minute dinner conversation with David Chase and various guests. This is easily the best special feature on the entire release. Lastly there are over 20 minutes of lost scenes from each season. 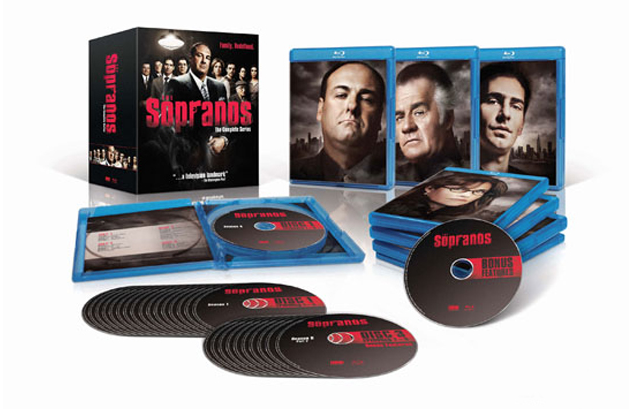 THE SOPRANOS®: THE COMPLETE SERIES BLU-RAY WITH DIGITAL HD
Collectible Box Set Featuring All Six Seasons of the Groundbreaking Series Available for the First Time on Blu-ray with Digital HD, November 4, 2014. Just in Time for Holiday Gift Giving

Complete Series Blu-ray Set is Packed with More Than Five Hours of Bonus Content, Including a Never-Before-Seen Feature Exploring the Legacy and Impact of the Game-Changing Series

New York, NY (June 4, 2014) – Fifteen years after making its revolutionary debut and radically altering the TV landscape, fans of the legendary HBO® series The Sopranos can now experience the show like never before. This fall, all 86 episodes of the beloved Emmy®, Golden Globe® and Peabody Award-winning series are available for the first time in a Blu-ray with Digital HD collector set in 1080p high definition. With 28 Blu-ray discs packaged in an elegant box set featuring iconic artwork from the series, The Sopranos: The Complete Series Blu-ray ($279.98) is an essential addition to any home entertainment collection. Featuring all six seasons plus bonus materials, this must-have set will be out in stores exclusively from HBO Home Entertainment on November 4, 2014 – just in time for the holidays.

Blu-ray with Digital HD Set Special Features
The Sopranos: The Complete Series Blu-ray comes with a free Digital HD copy of all 86 episodes, and the set is also loaded with more than five hours of bonus material including a new and exclusive feature exploring how The Sopranos came to be and how it transformed the television landscape. “Defining a Television Landmark,” which runs approximately 45 minutes, features all-new interviews with cast, crew, celebrities, filmmakers and academics — including series creator David Chase, star James Gandolfini, Academy Award® winning director Steven Soderbergh, Emmy® Award winner Jeff Daniels and Golden Globe winner Steve Buscemi — discussing the impact and influence of the groundbreaking series, with brand new archival footage. Additional bonus material includes lost scenes, two round table dinners with cast and crew, 25 audio commentaries and much more.

James Gandolfini, whose performance as mob boss Tony Soprano in HBO’s seminal series “The Sopranos” earned him multiple Emmy Awards, has passed away in Rome after an apparent heart attack. He was 51.

The New Jersey born actor first made an impression when he made his Broadway debut in the revival of “A Streetcar Named Desire” in 1992. I was fortunate to see the show during it’s limited run and Gandolfini more than held his own against top billed stars Alec Baldwin and Jessica Lange. Film fans will remember him as the hit man assigned to kill Patricia Arquette in Tony Scott’s adaptation of Quentin Tarantino’s “True Romance.”

Memorable supporting performances in films like “Get Shorty,” “A Civil Action” and “Fallen” led him to what would be the role he will most be associated with, Tony Soprano. His work earned him six Emmy nominations (and three awards) as well as four Golden Globe nods (with one win). He took advantage of his new popularity by getting lead roles in such films as “The Last Castle,” “The Taking of Pelham One, Two Three” and last year’s Best Picture nominee “Zero Dark Thirty.” He also gave an amazing performance (my words) giving voice to the character of Carol in the film adaptation of “Where the Wild Things Are.” He also returned to Broadway in 2009, earning a Best Actor in a Play Tony Award nomination for “Gods of Carnage.”

He was seen on screen earlier this year in the Steve Carell comedy “The Incredible Burt Wonderstone” and, according to the Internet Movie Data Base, has two more film projects being released posthumously.