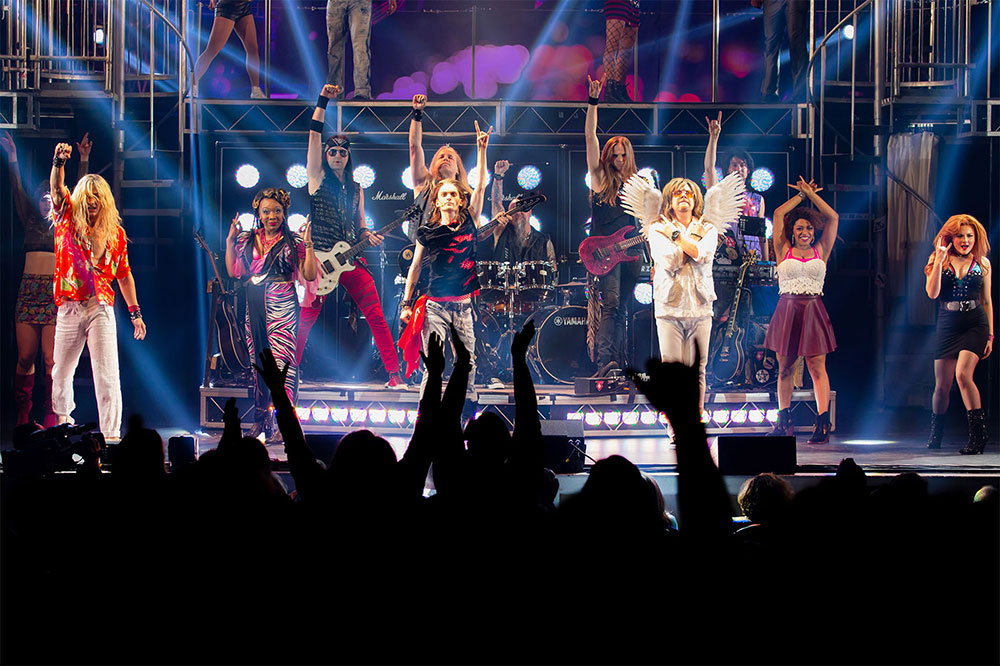 My first Broadway show was “42nd Street” in 1981. Yes, I’m old. But I’m also able to tell people that I saw Jerry Orbach on Broadway. And Julie Andrews. And Chita Rivera. But enough about me. I’ve seen plenty of shows in the past three-plus decades but I have never seen anything as fun and exciting as “Rock of Ages.”

Our story begins in the small town of Paola, Kansas. Yes, it’s a real town and, yes, it’s really small. My son’s baseball team used to play there every year and I remember the big hoopla when Walmart showed up! We meet Sherrie (Katie LaMark). She’s a small town girl…living in a lonely world. And her dream is to make it to Hollywood to pursue an acting career. Despite her parent’s disapproval she heads west and ends up on the Sunset Strip. She is soon mugged and is rescued by Drew (Anthony Nuccio). Drew works at the Bourbon Club, famous for helping launch the careers of many a band. Drew gets Sherrie a job and soon….well, you’ll have to see the show.

I’ve been seeing shows at Starlight for years, and this was, by far, the BEST one I’ve ever seen there. I had only seen the film so I wasn’t prepared for my evening at the Bourbon Club. The music is all classic 80s rock and metal hits. Pretty much every band you can remember is represented. Except, ironically, Def Leppard, whose hit song gives the show it’s name. We are told by the Narrator (an amazing John-Michael Breen) that there is no Leppard in the show because the band wouldn’t license their music. Ironic, isn’t it?

The performances were also outstanding. As Sherrie and Drew, LaMark and Nuccio have a strong chemistry and an underlying sweetness that has you rooting for them. Both also have great voices. During “Oh, Sherrie” Mr. Nuccio held one note for an amazing 33 seconds, which brought the already enthusiastic audience to near euphoria. I would love to see him tackle the lead in “Jekyll and Hyde.” And extra credit to Ms. LaMark for dealing with a major technical glitch (her face mic was not working at the beginning of Act II and, with her character having to remain on stage for some time, delivered a strong performance using a hand-held microphone. Also credit to the tech crew because, in the few seconds she was able to go off-stage, the problem was corrected. Fine performances were also delivered by the supporting cast, with many in the audience falling under the spell of Sam Harvey, who plays quintessential (and problem child) front man Stacee Jaxx – which is possibly the coolest rock star name ever. And I would be remiss if I didn’t give a shout out to the kick-ass band that provides the music.

I’m saving this paragraph for the highlight of the show – John-Michael Breen. He not only narrates the show but appears as the Bourbon Club’s sound guy, Lonny. Lonny loves three things. Rock and Roll and his Fogmaster 5000 fog machine are two of them. Mr. Breen gives the show the majority of it’s laughs and both the cast and the audience feed off of his enthusiasm. I will definitely keep an eye on his career and hope to catch him on stage in the future.

As I said in the beginning, I’ve seen some great Broadway shows, from “Phantom” to “Les Miz” – from “Cats” to “Spamalot – and “Rock of Ages” has definitely jumped onto my all-time favorites list.

“Rock of Ages” is only in Kansas City through Sunday, June 2nd. For information on upcoming tour dates, click HERE.