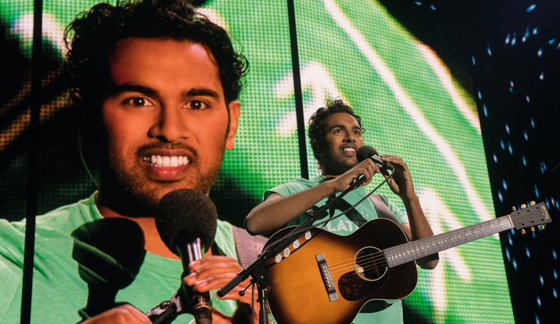 Dear Readers – If you would please indulge me:

AN OPEN LETTER TO RICHARD CURTIS – Sir, in the trailer for your 2003 film “Love Actually,” you include a scene of Andrew Lincoln holding up a card to Kiera Knightley which reads HELLO FATSO.  This scene is NOT in the film.  What did that mean?  I know her character liked sweets.  Did her husband complain she was getting a fat arse???  If Richard Curtis is reading this, or if anyone knows the answer, please reply to me via this website.  Thank you.  We now return to your scheduled review.

I’m 58 years old.  I grew up with the Beatles.  The very first record I ever purchased was “Hello/Goodbye.”   I wept when John Lennon died.  So to imagine a world where the Beatles and their music never existed would be horrible to me.  But it works out well for Jack Malik (Patel) an aspiring musician who, despite having some talent, cannot make it into the music business.  After a disappointing gig he announces to his manager Ellie (James) that he’s hanging up the guitar and going back to teaching.  Unable to talk him out of it, Ellie watches as Jack pedals his bicycle into the night.  However, soon their lives will change forever.

Directed by Oscar-winner Danny Boyle (“Slumdog Millionaire”), “Yesterday” is a lot like the Beatles songs that fill the soundtrack – an emotional rollercoaster.  After an accident with a bus, Jack gets out of the hospital to discover that things are different.  When he asks for a Coke he is given quizzical looks.  When he plays the song “Yesterday” to Ellie and her friends, they are amazed by the song, asking him when he wrote it.  He tells them that it was a song by the Beatles, but only gets blank stares.  When he Googles “the Beatles” on the Internet, he is directed to the bugs.  Curious, he tries other bands and is relieved that the Rolling Stones are still around.  He is even more relieved when he learns that the band Oasis isn’t.  Realizing the situation, he begins performing Beatles songs and soon catches the ear of musician Ed Sheeran, who challenges Jack to a spontaneous song writing contest.  10 minutes later, Sheeran delivers a sweet song about love.  Jack counters with “The Long and Winding Road.”  Boom!  Mic drop!

Patel is very strong as Jack.  He has a pleasant enough voice and, when he sings from the Beatles catalog, he isn’t just covering the songs, he invests an emotional weight into them, as if he HAD written them.  When he performs “Help” in front of a huge crowd, he’s literally begging for someone to help him get off of the rollercoaster he has found himself on.  James and Sheeran are also quite good, with Sheeran having fun at his own expense, even going so far as to suggest that Jack rename “Hey Jude” as “Hey Dude,” which apparently he finds cooler.

The film also packs an emotion punch with a scene that had many in the audience, myself including, tearing up.  Boyle’s direction is brisk and screenwriter Curtis is at the top of his game.  And you can never go wrong with a soundtrack consisting of 17 of the Beatles’ greatest songs.  As John Lennon sang in Being For the Benefit of Mr. Kite, “a splendid time is guaranteed for all!”