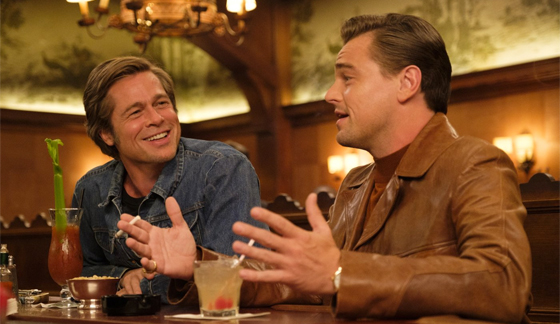 THE 9th FILM FROM QUENTIN TARANTINO!! So read the ads for the filmmaker’s latest opus, a love story to old-time Hollywood, with a little Charles Manson thrown in for good measure, called “Once Upon a Time…in Hollywood.”

1969.  As the New Year begins we find ourselves in the company of former western television star Rick Dalton (DiCaprio) and his constant companion and stunt-double Cliff Booth (Pitt).  Rick’s career has waned since his turn on “Bounty Law.”  After a few action films, Rick has found himself appearing on episodic television, usually as the bad guy.  In fact, as he meets with the producer of an upcoming “Spaghetti” Western (a wasted Al Pacino), he can’t help but brag about his upcoming turn on “The F.B.I.”    Meanwhile Rick’s neighbors,  a pair of young newlyweds, return from Europe and make their way to their canyon home on Cielo Drive.  Their names:  Roman Polanski and Sharon Tate.

A love letter to the Hollywood he grew up watching, “Once Upon a Time…” is quite possibly the least “Tarantino” film the two-time Oscar winner has ever created.  I recently learned that this project was originally intended as a novel, and after watching the film I can understand why.  This is basically two individual stories, slowly woven together, that intersect occasionally before climaxing in a “what-if” explosion of fury and satisfaction.

Story one is Rick and Cliff.  Their continued bonding, their obvious love (platonic) for each other and the way they each have the other’s back.  DiCaprio and Pitt have great chemistry together, and a bromance I haven’t seen since Paul Newman and Robert Redford worked together in “Butch Cassidy and the Sundance Kid,” which happens to be a film actually released in 1969.

Story two focuses on Sharon Tate (an excellent Robbie), who is portrayed her as a sweet, unassuming young woman whose idea of a good time was going to see one of her films at a theatre and smile at the audience’s acceptance of her work.  We accompany her and Roman as they attend parties with such celebs as Michelle Phillips, Cass Elliott and Steve McQueen. It’s heartbreaking to see the character so full of life, both figuratively and literally, when you know the tragic way that life ended.

The story begins to get intense when Cliff one day meets Pussycat (Margret Qualley), who hitches a ride from Cliff back to her commune, hoping to introduce him to her friend Charlie.  Yes, that Charlie.  The entire Manson family is represented, from wacky future would-be-presidential-assassin Squeaky Fromme (Dakota Fanning) to “Tex” Watson (Austin Butler).  We even get Bruce Dern in senile “old-man” form as Spahn Ranch owner George Spahn.

At more than two and a half hours, the film does have its slow points.  I also had some issues with Tarantino’s use of occasional flashbacks.  At least they seem to be.  A scene where Cliff meets the show stunt coordinator, played by Kurt Russell.  In what appears to be the next moment, we find Cliff taking on Bruce Lee (Mike Moh) in what appears to be on the set of “The Green Hornet,” which left television in 1967.  Moh is solid in this small, but entertaining scene, and once again Tarantino has managed to attract an amazing cast, from regular players like Michael Madsen and Zoe Bell to newcomers like Pacino, Emile Hirsch, Timothy Olyphant and the late Luke Perry.  Heck, the cast even includes a group of second generation actors including Rumer Willis (daughter of Bruce), Harley Quinn Smith (daughter of Kevin) and Maya Hawke (daughter of Ethan and Uma Thurman).

Visually the film amazes.  Tarantino fills the screen with reminders of the good old days of Hollywood, from brightly lit marquees to oversize movie posters.  The script has some classic dialogue, though the almost near-absence of the “F” word – and the non-appearance of the “N” word – may surprise some of Tarantino’s fans.

Tarantino is on record as saying he only wanted to make ten films.  This is #9.  I’m curious if he will be true to his word and, if so, what that film would be.  I’ve read he’d like to do a “Star Trek” film, but I can’t imagine one of the most creative and influential filmmakers of all time ending his career as a gun-for-hire.  Whatever he does, it will be the book-end on an amazing career.