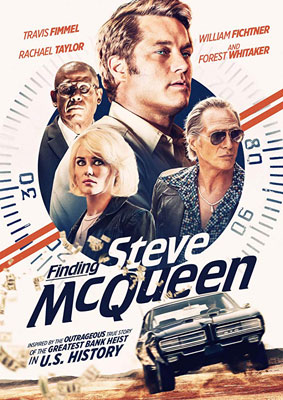 1980.  In a small California town, Harry Barber (Fimmell) has something to confess to Holly (Taylor), his girlfriend of seven years.  Holly thinks a break-up is coming but it’s more like a stick-up.  You see, Harry is a bank robber.

Based on a true story, “Finding Steve McQueen” is one of the smaller films that often get overshadowed by the latest offerings from the Marvel Cinematic Universe.  Through flashbacks we find Harry back in 1972 (who Molly knows as John) working in his Uncle Enzo’s factory, along with his younger brother, Tommy (Jake Weary).  The factory is a front for Enzo (played by the always fun to watch Fichtner), who is, for lack of a better word, the “boss” of Youngstown, Ohio.  Enzo has learned from a friend that President Richard Nixon, who Enzo is definitely not a fan of, has squirreled away $30 million in campaign funds in a bank not far from San Clemente (the Western White House).  Eager for a big score, and the chance to stick it to the President, Enzo and his team, including Harry and Tommy, journey west to pull off what Enzo believes will be the perfect crime.  After all, if someone steals the President’s dirty money, who can he call?

The film is both clever and, if you’re a fan of the 1970s, nostalgic.  The script, by Ken Hixon and Keith Sharon, moves sharply through the decade, taking time to introduce things like hot tubs and historic characters.  When the F.B.I. bureau chief (Oscar winner Forest Whitaker) gets a visit from his boss, Mark Felt (John Finn), you can’t help but smile when Felt tells him to read an article in the Washington Post written by “a couple reporters named Woodward and Bernstein.”  For those who don’t remember their history, Felt was the infamous “Deep Throat” who led Woodward and Bernstein to their Pulitzer Prize.

Director Johnson keeps the story moving and kudos as well to whoever picked the songs that accompany the on-screen action.  They helped set a perfect tone for a film that doesn’t need someone in Spandex to make it entertaining.