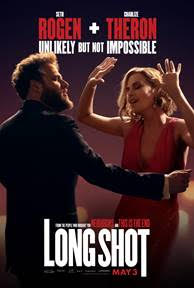 I’ll give a smidgen of credit to Hollywood for attempting to change up the tired trope of the average guy getting a woman who is way out of his league. The “Long Shot” follows in line with other movies before it, like “Knocked Up,” “Superbad,” etc. So it’s no surprise that Seth Rogen, the go-to as of late for the down on his luck schmuck, gets paired with Charlize Theron for “Long Shot,” a movie that’s better than it’s supposed to be, but not as good as it thinks it is.

Fred Flarsky (Rogen) is a journalist, who has decided to quit instead of being let-go or continuing to work after his small time paper is bought by a media conglomerate. Through the most bizarre and unlikely of circumstances, Fred becomes reacquainted with Charlotte Field (Theron, his first crush, when she used to babysit him. Charlotte is now one of the most powerful people on the planet, the U.S. Secretary of State. But she has higher aspirations, especially after the President, played briefly, yet incredibly well by Bob Odenkirk, relays to her that he has no plans of seeking re-election. Sparks and complications arise when Charlotte hires Fred on to punch up her speeches as she gets ready to hit the campaign trail.

Whether you like “Long Shot” or not is based solely on the chemistry between Rogen and Theron. The odd couple matching work surprisingly well because Rogen tones down his frat boy antics and Theron demonstrates the comedic timing she’s shown flashes of previously on “Arrested Development” and in “A Million Ways to Die in the West.” Outside of the pull and tug of their contrasting personalities, they manage to have their characters do a bit of soul searching and learning along the way, which elevates the humdrum plot. The comedy is hit or miss, with the hits being crude and the misses being the stereotypical “fat man fall down go boom.”

There’s an underlying smugness to “Long Shot,” but luckily it stops itself from reveling in liberalism for too long in the film’s third act. Granted, I agree with a lot of the film’s political and social insights, but I and others don’t need it being delivered to us in such a ham-fisted fashion. It’s about as politically ferocious as a middle school class president election debate. Although I’d gladly watch a TV show of Rogen and Theron on the campaign trail, munching on the political landscape because it once again plays into the character’s complimentary personas.

“Long Shot” is an average rom-com, where the performances elevate the mundane story. A handful of riotous moments keep the film from dragging during its two-hour runtime, although those with an easily upsettable nature may find the film too crass. It’s hard to ignore the charm of the on-screen duo, even if you find yourself rolling your eyes when the film falls back on rom-com clichés.