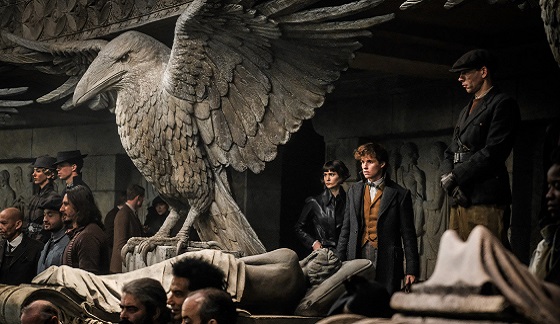 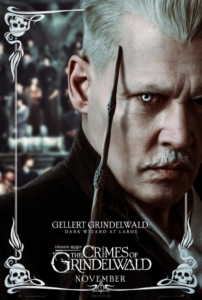 Is “Fantastic Beasts: The Crimes of Grindelwald” fantastic or criminal? The answer falls somewhere in the middle. This second installment of what is intended to be a series of “Fantastic Beasts” films, all from the mind of “Harry Potter” creator J.K. Rowling, is a long-winded tale that lacks the charm of its 2016 predecessor. The story is predictably darker in tone, but a bulk of the over two-hour running time is a snooze fest.

Set in 1927, “Crimes of Grindelwald” begins excitingly enough as we watch Johnny Depp play the steely fanatical villain Gellert Grindelwald, regarded as one of the two most powerful wizards around, make a daring yet well-planned escape from the British Ministry of Magic. That’s when the story comes to a screeching halt as we are then forced into the world of mild-mannered Magizoologist Newt Scamander (Eddie Redmayne) as he tries to get his international travel ban lifted.

Not much has changed with our hero since the original – he refuses to take sides, rarely makes eye contact with anyone, and has trouble communicating with the opposite sex. Newt is offered the chance to work alongside his brother for the Ministry of Magic in order to locate the powerful yet troubled Obscurial Credence Barebone (Ezra Miller, “Justice League”), but he refuses. However, he cannot turn down his former teacher Albus Dumbledore (Jude Law) so he travels secretly to Paris with his Muggle sidekick in-tow, Jacob Kowalski (Dan Fogler) who’s fighting with wizard girlfriend Queenie Goldstein (Alison Sudol).

It’s all rather sluggish and overly contrived as we are bombarded with a dizzying array of plot points for not only this film, but also for the “Fantastic Beasts” sequels that are already planned. There is little in the way of suspense even though more and more characters are introduced who are trying to find Credence for a variety of reasons, some more mysterious or nefarious than others. Rowling’s story also tries to rekindle the endearing romance in the first film between Newt and Tina Goldstein (Katherine Waterston). Unfortunately, Rowling’s screenplay fails as their bumbling stumbling relationship feels like something straight out of a TV sitcom.

The character of Newt ends up becoming a boring, overshadowed distraction instead of a hero as we are left with wanting more of Law and Depp. Both are a treat to watch on the silver screen with Law successfully being able to make his own mark on a character already forged in the minds of “Harry Potter” followers by Michael Gambon and the late Richard Harris. Depp delivers one of his better performances as Grindelwald as he stays away from being overly quirky and gives his character a magnetic solemnity.

The pace is picked up in the last third of “Crimes of Grindelwald” as secrets are revealed, characters die, and those still living chose sides. Plenty of magical special effects abound but none are necessarily ground breaking or spell binding. Maybe it’s a sophomore slump and the “Fantastic Beasts” series will get better, but in the meantime it’s a disappointing pill to swallow.