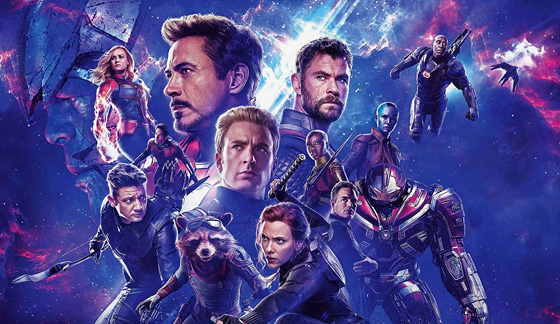 I think it’s ironic that the 22nd film in the Marvel Cinematic Universe (MCU) is opening the same week that the 25th James Bond film is announced.  James Bond first hit the screen in 1962 with “Dr, No.”  The MCU began in 2008 with “Iron Man,”  And while some of the Bond films have been hit or miss (I’m looking at YOU, “A View to a Kill”), I don’t think I’ve ever given an MCU movie a rating less than four stars.  Sadly, our rating system only goes up to five, because otherwise I’d give “Avengers: Endgame” six!

NOTE:  THIS WILL BE A SPOILER FREE REVIEW

“Endgame” picks up where “Avengers: Infinity War” ended…with half of the world’s population vanishing in a literal puff of smoke after the evil Thanos (a superb Josh Brolin) has donned his gauntlet, studded with the Infinity Stones, and snapped his fingers.  Unfortunately half of the people eliminated included some popular figures from the MCU, including Black Panther and Spider-man.  Those that have survived mourn their lost colleagues, with Tony Stark (Downey Jr, the backbone of this franchise) taking the loss of Peter Parker badly (I will say that, of all the characters that were lost in “Infinity War,” the loss of Parker hit me he hardest – Tom Holland has really inhabited the character).  The remaining Avengers gather and try to figure out how to return their world to the way they knew it.

I really can’t share any of my favorite moments for fear of giving away a plot point.  I will say this; you will laugh.  And you will cry.  And you will go through every emotion in the middle.  For the last eleven years we have met, and grown with, these characters.  We are as protective of them as we know they would be of us.  And the final chapter of this saga is one for the ages!