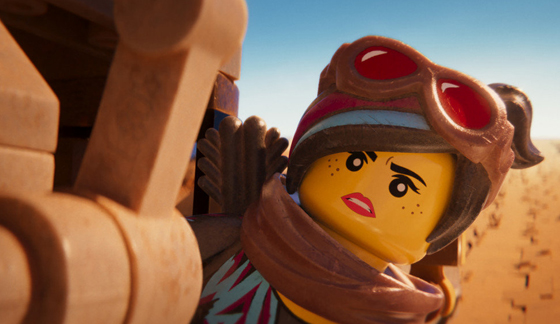 “The LEGO Movie 2: The Second Part” was never going to live up to the first. Well. I take that back. It could have. The first film’s core creators, Phil Lord and Chris Miller, are no longer at the directorial helm, but have their names plastered throughout the credits as producers and writers. Personally, I don’t think the oddball duo have yet to fail when they’re behind the camera. But as writers and producers, their names are surprisingly all over the place in Hollywood, from movies like “Smallfoot” to “Brigsby Bear.” They generally hop on board projects with promise, and while the follow-up to “The LEGO Movie” had promise, it partially delivers.

The sequel, just like in real life, takes place five years after the first film. The first one ended on the ominous announcement that real world child, Finn (Jadon Sand), has a baby sister. That baby sister has intruded on Finn’s imagination, therein intruding on the imaginary LEGO world on-screen. Emmett (Pratt) and Lucy’s (Bank) brick world has gone from a thriving metropolis to a “Mad Max” hellscape where other worldly LEGO creations stop off in their world to abduct and torment Emmett and Lucy’s pals. It’s only later that the duo find out that Queen Watevra Wa’Nabi (Tiffany Haddish), of the Systar System, is abducting their friends for a specific purpose and are now targeting them. Trying to explain this almost feels more confusing than it should be. So if you haven’t seen the first, just skip this one.

The manic whimsy of the first is still intact, as jokes sometimes come flying fast and furious with a kinetic energy that’s reminiscent of other Lord and Miller productions. Unfortunately the film takes a while to find out what new stories and themes it would like to tell the audience. The first handful of minutes are spent catching viewers up on events in the fictionalized worlds, as well as retelling jokes, beat by beat, down to the punchline. Older viewers might feel like they’re being duped, much like fans in the 80s felt when seeing “Airplane II: The Sequel.” Luckily that feeling dissipates after a while.

You may have forgotten, as you should, but there was a silly controversy back in 2014 when the first “LEGO Movie” came out. Some found that the movie was bad for kids because of its “anti-corporate” message. I can feel your eyes rolling as you read that. But for those who felt like that was a legitimate gripe, you’ll be pleased to know that this film feels a lot more like a cash grab and doesn’t have an anti-capitalist leaning. That being said, there are still a lot of moments of subversive brilliance possibly directed at the studio.

A good chunk of those clever jokes seem to be digs at Warner Bros., who may have demanded a sequel after money came rolling in. I won’t give the playful comedic jabs away since they’re in the film’s third act. In a handful of instances before that, the film appears to be taking part in other kid’s movie tropes, like musical numbers or sequel/world building, as a chance to not only make-fun of the constructs, but point out how they’re generously shoehorned in to most narratives in kid’s movies. If Lord and Miller merely served as producers, and not writers, I might actually feel like some of these creative choices were studio notes. It’s also possible I’m looking far too into it.

Even while scraping away some of the layered intellect this film has, this sequel is non-stop eye candy accompanied by rapid-fire jokes that’ll put smiles on the faces of kids and adults alike. While there’s no doubt that this’ll please the young ones, it might have some parents who watched the first one feeling fatigued. That’s because it doesn’t quite match the persistent irreverent wit of the first, or the revelations that reward viewers who watch the film a second time. Even though I’ve spent a lot of time comparing this one to the original, this sequel still manages to squeeze out some heart from its human and brick characters. “The LEGO Movie 2: The Second Part” is beautifully animated, uproariously funny and mischievously inventive, but not as much as as its predecessor.