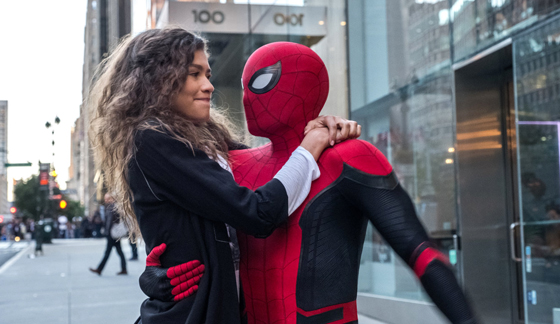 If you haven’t yet watched “Avengers: Endgame,” then there’s a couple of things I’d like to say. 1. How have you not? 2. Why are you reading this if you haven’t? 3. You know there will be spoilers abound in “Spider-Man: Far From Home” for “Endgame,” if you haven’t watched it yet, right? Now, while my review will not have any spoilers, because Marvel fans are becoming incredibly irate about the slightest drip of a reveal and I generally find it to be disingenuous to do so in a review, I think it’s important for those who haven’t seen “Endgame” to know that they’ve been warned.

Seemingly weeks, maybe even days, after the events of “Endgame,” “Far From Home” wastes no time getting us up-to-date on what’s going on in the world of Peter Parker/Spider-Man (Holland). As comically explained in a high school TV news update, the Thanos snap threw a curveball and some students are now towering over the other students because of the five-year gap. Meanwhile, there are fresh reminders that the world continues to mourn the loss of Tony Stark/Iron Man, and immortalize him in whatever way they can. However, the movie isn’t too clear on where we’re at chronologically within this world or Peter’s world, but who cares? He’s going on a European trip, hitting the proverbial FU button on his phone when Nick Fury (Jackson) calls, and trying to get in good with MJ (Zendaya).

“Far From Home” may have actually worked infinitely better as a high school comedy, as opposed to a superhero movie. That’s because the villain(s) of this movie aren’t that interesting, nor is there a lot of peril when Peter has to quickly throw on the Spider-Man suit and save the day. The movie works a lot better when Peter and his classmates are goofing around in Italy, Austria, or whatever European country they find themselves in. The movie makes this odd choice of trying to convince us, as well as S.H.I.E.L.D., that Peter is the savior of Earth, and to some extent, the next figurehead for hope like Iron Man was. That’s hammered home a lot, even though the film repeatedly shows us that Peter is too young or inept at being a hero, sometimes to cataclysmic effect.

I did have some fun here and there, warming up to the characters like a fire in a snowstorm, but there’s too many boneheaded decisions, and pivots in tone and direction. I’m also not entirely sold on the relationship between Peter and MJ, mainly because the movie seems to just assume that we already know why they like one another and why they should be together. It’s almost like “Far From Home” suffers from being sandwiched between the most climactic finish to a series of films and the beginning of a new cinematic phase. That really puts the teenager superhero, and the filmmakers, in precarious situation. It’s also quite possible that superhero fatigue is setting in after the “Endgame” sugar rush.

“Far From Home” is a fun epilogue to “Endgame,” but it isn’t strong enough to stand on its own merits. Thankfully this movie doesn’t hit the lows of other Marvel sequels, like “Iron Man 2” or “Thor 2,” thanks to the charm of its lead, Holland, and his pairing with Jake Gyllenhaal who, as per usual, gives it his all. I didn’t love it as much as “Homecoming” and I probably won’t rewatch it as much as “Guardians of the Galaxy” or “Infinity War,” but it’s passable enough that you’ll leave with a smile, although it’ll fade by the time Marvel churns out another one of these.