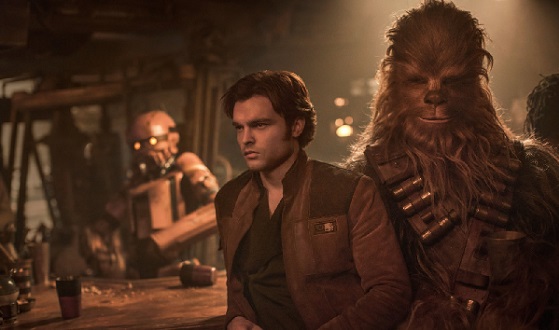 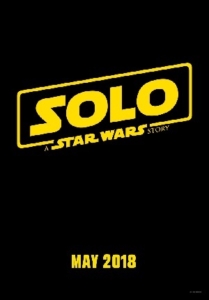 A long time ago in a galaxy far, far away.

For more than four decades, those words have promised great adventures and memorable characters.  And most of the time those promises were kept.  I crossed my fingers going into this one but I’m happy to report that the new film “Solo,” like Gary Busey in the 1990s, is indeed a promise keeper.

Brash and full of confidence, we meet a young Han (Ehrenreich) and his lady friend Qi’ra (Clarke) right after they’ve been double-crossed while doing a deal at the behest of the evil Lady Proxima (voiced by Linda Hunt).  The good Lady is not pleased but, before she can punish the duo, they make a run for it.  While Han makes his way to safety, Qi’ra is caught.  Knowing he must go away, Han joins the service, determined to become a pilot.  Wonder how that’s going to turn out for him?

Set, in my mind, about 10 years before the events we know as EPISODE IV: A NEW HOPE or, simply STAR WARS, “Solo” is an origin story in the true sense of the word.  Taken under the wing of smuggler/thief/jack of all trades Tobias Beckett (Harrelson) we learn many things about Han.  Where he got his blaster.  How he met Chewbacca.  Heck, we even find out where he got his name.  Through the course of his adventures, he meets a young, kindred soul named Lando Calrissian (Donald Glover), a card cheat who has an almost unhealthy amount of capes in his closet.  Together, the two adversaries begin a cautious friendship that, we now know, will continue for many years.

There is a lot more I could say, but I don’t want to be known as the guy who forgets to yell SPOILER ALERT!  What I will say is that director Howard has set the pace for a film that could easily stand alone.  All in all, “Solo” is a welcome piece in the continuing “Star Wars” saga!