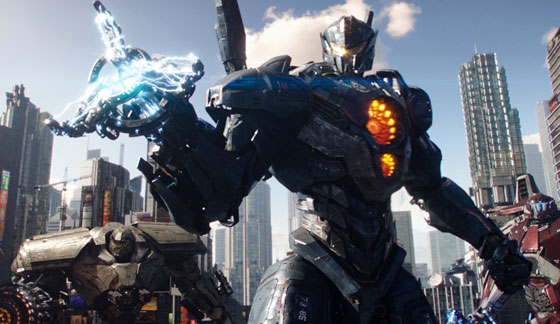 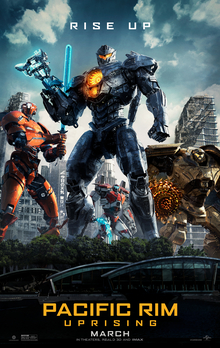 Since I was a kid, I have always been a fan of the Kaiju films like “Godzilla”, “Ultraman” and even “Power Rangers”. I loved the first “Pacific Rim”, especially in 3D. The action sequences are outstanding, especially in the water. Unfortunately, my excitement for the sequel has been next to nothing. I blame it on the studio because I am not the only one either. My friend told me because I posted about seeing it, it was the first time he even knew it was coming out (and he LOVED the first film). I see that as a missed opportunity for this film. I called this one a bomb before even seeing it based on how it was being marketed and I wasn’t wrong. Listen, I want to see more films like this in theaters, so I definitely say support it otherwise films “Godzilla” and “King Kong” won’t get made but I would have just liked a little more effort in this film and less trying to setup a new “Cinematic Universe” to make a new franchise.

I was excited to find out that “Pacific Rim: Uprising” was playing in the 4DX experience in one of its ten theaters across the country in Orlando FL. This made the movie feel like a two hour rollercoaster ride. I didn’t love the movie but with the 4DX experience I like it more overall. The fog is my only complaint since it was just one machine in the front of the theater and didn’t add anything. The motion chairs were moving non-stop and I was exhausted by the end of the movie for sure! If you get a chance to see this film and have a way to see it in 4DX I would definitely recommend that experience for sure.

Here is the long winded official premise: John Boyega stars as the rebellious Jake Pentecost, a once-promising Jaeger pilot whose legendary father gave his life to secure humanity’s victory against the monstrous “Kaiju.” Jake has since abandoned his training only to become caught up in a criminal underworld. But when an even more unstoppable threat is unleashed to tear through our cities and bring the world to its knees, he is given one last chance to live up to his father’s legacy by his estranged sister, Mako Mori (Rinko Kikuchi)-who is leading a brave new generation of pilots that have grown up in the shadow of war. As they seek justice for the fallen, their only hope is to unite together in a global uprising against the forces of extinction. Jake is joined by gifted rival pilot Lambert (Scott Eastwood) and 15-year-old Jaeger hacker Amara (Cailee Spaeny), as the heroes of the PPDC become the only family he has left. Rising up to become the most powerful defense force to ever walk the earth, they will set course for a spectacular all-new adventure on a towering scale.

John Boyega gets a chance to shine outside of the “Star Wars” gang but ends up getting lost in the confusion and doesn’t really have a strong arc and no love interest, which I felt he needed. I do not understand why people like Scott Eastwood. I think he is a terrible actor and I roll my eyes every time he is on the screen trying to be tough. there are three returning talent from the first film including Rinko Kikuchi (for 10 seconds), Burn Gorman and Charlie Day. I really dug having Burn and Charlie day back! They made the film more enjoyable to watch. I didn’t like how the rest of the cast was made up with teenagers, it felt like I was watching a Nickelodeon

“Pacific Rim: Uprising” was definitely a different kind of movie from the first. The first kicked off in an epic battle and then filled you in as time went on and I dug that. The sequel starts explaining way too much in the beginning and takes a while to get going. The sequel doesn’t have the heart or the visuals to match the first film but ends up being a fun popcorn flick. Just keep your expectations low and don’t expect it to be like the first film. If their is more films, I want more Charlie Day for sure! Luckily for the 4FX experience which really enhanced my experience watching this film, I ended up leaving the theater excited for more to come. I can’t help it I am sucker for giant monsters and robots!!