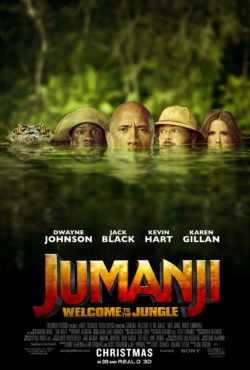 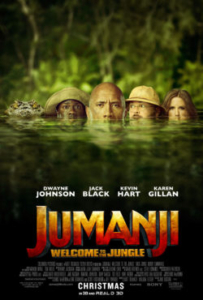 In 2015 there was a collective gasp by 90’s kids after Sony confirmed long held rumors that the studio would be making a sequel to the much-beloved “Jumanji.” The 1995 film is just one of the many reasons Millennials fondly remember Robin Williams, so creating a sequel for it over two decades later for a new generation is no easy task, even if their the goal is to cash in on nostalgia.s

The new film picks up in 1996, where an unnamed boy is given the classic Jumanji board game by his father. He tosses it aside and proceeds to play a video game instead. Sensing its expiration date, the board game creates a video game cartridge for the unnamed boy to pop in. Tripping ahead 20 years later, we meet four teenagers, stuck in detention with a mundane task, and looking for an escape. That’s when the Jumanji video game rears its ugly head, with those iconic jungle drums, entrancing the high schoolers to plug it in.

Whereas the original brought the jungle to our realm, the new Jumanji transplants it’s victims into its realm. The teenagers take the form of video game avatars, played by the surprisingly charismatic and charming hodgepodge of Johnson, Gillan, Hart and Black. Their comedic strengths (except Gillan) are somewhat subdued so that there’s a lot more group improvisation and camaraderie so that no one overwhelms or steals a scene.

With five screenwriters, there are moments where “Jumanji: Welcome to the Jungle” seems to understand video game clichés and utilizes them while at other times it seems to be written by a middle-aged man who believes video games are the death of creativity. In some ways you could say this movie suffers from the pitfalls of other video game movies where there’s not enough time to flesh out exposition and the action sequences suffer from rushed conflict resolution. But when the movie embraces video game tropes, it genuinely excels as popcorn entertainment and parody.

“Jumanji: Welcome to the Jungle” benefits from a fun cast, willing to embody their absurd characters and the even more ridiculous plot. But that doesn’t mean the film isn’t without its flaws. The third act is weak, sometimes neglecting established plot points and making little use of the actual jungle. I’m also curious as to how well it’ll be received and understood by those who grew up without the film or are unaware of the previous flick. For those looking for a healthy dose of nostalgia, “Jumanji: Welcome to the Jungle” is a passable film, but it doesn’t make the case for a potential franchise or another sequel.