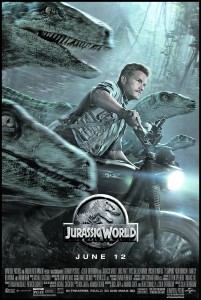 Like most Millennials, “Jurassic Park” still holds a special place in my heart. When it’s on TV, I watch it. When I think dinosaurs, I think of the creatures I saw stalking around in Steven Spielberg’s movie. And it was the first PG-13 movie I got to lay eyes on. I’m sure most people, when talking about “Jurassic World”, will reminisce about “Jurassic Park”, much like a friend they haven’t seen in a while, but have not forgotten. “Jurassic World” is a sufficient new friend that you’ll also gladly reflect back on in 20 years.

Seemingly ignoring the events of “The Lost World” and “Jurassic Park 3” (thank God), “Jurassic World” seems to follow the real world’s timeline, picking up over 20 years after the events of its 1993 counterpart. This time around, the park is more than Jeeps on a monorail style track going from exhibit to exhibit. The park is a lush and lavish Disney World style resort. Interactive exhibits and museums are sprawled out everywhere. There are hints of the stereotypical spa baths and golf courses that accompany these amusements. Then of course, there are the dinosaurs. Every exhibit births a new awe inspiring moment for the people within the movie and us viewers in the theater.

Claire (Howard) runs the show behind the scenes, attracting new investors, cracking the whip in the control room, and making sure no disasters happen. She’s hoping to see a spike in attendance, and some more corporate investors, with her future attraction, Indominus Rex. Now I know the few paleontologists who read movie reviews are already swearing at their computer screens that that’s not a real dinosaur. Well, it isn’t. Since kids these days (in the movie and probably in real life) just aren’t wowed by dinosaurs anymore (stupid kids), they’re having to concoct some news dinosaurs in the lab.

Everyone loves this idea, except Owen (Pratt). Owen is like the park ranger. He lives in a mobile home trailer on site, rides around on a motorcycle, and to be blunt, is a total badass. Anyone who can crack the code to how to be the Alpha to a pack of velociraptors is pretty awesome in anyone’s books. Owen understands animals more than anyone around him. Where he sees nature, they see green. So when he learns that they’ve created a monster and treated it worse than Harry Harlow treats monkeys, he can sense trouble.

Even before the inevitable jailbreak, “Jurassic World” is a lot of tongue-in-cheek fun. Even after the jailbreak, there’s a perfect balance of humor and suspense. The creators of “Jurassic World” seem to understand how far to push their outlandish ideas without teetering into “Lost World” territory and they make their characters a lot more intelligent than the ones scurrying about in “Jurassic Park 3”. A lot of time and care went into the story and they’ve really handpicked the best cast. Count this as blockbuster number two for Chris Pratt who seemingly can do no wrong since bulking up for “Guardians of the Galaxy”.

It becomes painfully obvious in the third act of “Jurassic World” that there were four screenwriters. They quickly try to wrap up every sub plot, which becomes a hassle and a little bit too choppy when we want the dinosaurs to keep chomping away. It’s easy to gloss over some of these moments that need polishing when there are a couple clever twists on some of the typical clichés we’ve come to expect from our summer blockbusters.

“Jurassic World” far exceeds expectations with a fun cast and exciting story. It’s the perfect popcorn flick for sun weary crowds. Sure it’s sometimes hammy and predictable, but what it lacks in originality, it makes up for in Meta commentary. Without going too much into the details, there’s a great moment where a character points out the commercialization of attractions, well after many gratuitous shots of product placements in the movie. If it took them over two decades to nail down a legitimate sequel to “Jurassic Park”, I’m willing to wait that long again for an epic sequel to “Jurassic World”.