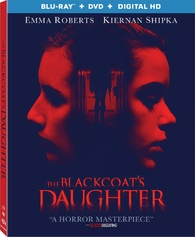 “The Blackcoat’s Daughter” is a film that premiered back at TIFF back in 2015 and has sat on the shelf since then without getting a proper release. This film is a great mix of creepy slow-burn almost Hammer like atmosphere with a solid horror angle mixed it. It has a solid cast including Emma Roberts, Kiernan Shipka, James Remar, Lauren Holly, and Lucy Boynton. Great talent here. Worth checking out on a lazy weekend for sure for a few good jumps.

Official Premise: Beautiful and haunted Joan (Emma Roberts) makes a bloody and determined pilgrimage across a frozen landscape toward a prestigious all-girls prep school, where Rose (Lucy Boynton) and Kat (Kiernan Shipka) find themselves stranded after their parents mysteriously fail to retrieve them for winter break. As Joan gets closer, Rose watches in horror while Kat suffers terrifying visions and becomes possessed by an unseen force.

“The Blackcoat’s Daughter” comes as combo pack with a Blu-ray + DVD + Digital HD copy included. The 1080p transfer works with the dark and creepy feel for the film. The DTS-HD Master Audio 5.1 track delivers the eerie score perfectly and adds to the Gothic feeling of the film. The special features include an audio commentary track with Writer-Director Osgood Perkins as well as a behind-the-scenes featurette “The Dead of Winter: Making The Blackcoat’s Daughter”.

One Reply to “Blu-ray Review “The Blackcoat’s Daughter””