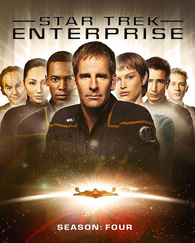 Well this is the end folks. Season four is the final season of “Star Trek Enterprise”. The series starred Scott Bakula, Jolene Blalock, Connor Trinneer, Dominic Keating, Linda Park, Anthony Montgomery and John Billingsley. These final episodes follows the adventures of the first Earth-built vessel capable of breaking the Warp 5 barrier. The show was no question cut off too show. Season four was one of the best seasons but luckily since being canceled it has spawned a nice new life with fans. Since being canceled though, this marks the first time that the series “Star Trek” has not had a TV show on the air since The Original Series. This is a must own for all Trekkies.

Official Premise: In the final harrowing season of Star Trek: Enterprise, timelines collide as Captain Jonathan Archer and his crew rally with humans and other species to form the Federation and prevent intergalactic war. Starfleet and the crew of the Enterprise are put to the test as they fight to avoid a deadly virus on the ship, deal with an alternate “mirror” universe, battle radical alien factions, and prevent the alteration of history – including a Nazi-occupied America. If the Temporal Cold War is not brought to an end, history and life as they know it will be forever altered.

“Star Trek: Enterprise – Season Four” boasts the best Blu-ray presentation out of the series. The 1080p transfer on these episodes are fantastic. This season was quite ambitious and really looked great. The DTS-HD Master Audio 5.1 tracks are equally impressive. I am going to miss hearing that theme song circle my surround sound system, luckily these episodes have great replay value. Other audio track included are German 5.1 Dolby Digital, French Stereo Surround and Japanese Stereo Surround as well. The discs also include English SDH, French, German, Japanese and Dutch subtitles.

If you are a fan of this series, you know that they have been jam-packed with amazing new and ported special features. The real highlight to this release was “In Conversation: Writing Star Trek Enterprise”, which is an exclusive, 90-minute writing staff reunion special. It brings together series creator and executive producer Brannon Braga, along with Mike Sussman, André Bormanis, David Goodman, Chris Black, Phyllis Strong, and Judith and Garfield Reeves-Stevens talking in great detail about behind-the-scenes stories for this series. There is also a newly produced, four-part documentary “Before Her Time: Decommissioning Enterprise,” which includes more in-depth interviews with the cast and crew.

Disc Six includes yet another three commentary tracks. The first is a brand new track with Connor Trinneer and Dominic Keating on “Terra Prime”. There is a 2005 episode commentary track with Judith & Garfield Reeves-Stevens and Tim Gaskill on “Terra Prime”. Lastly there is a text commentary with Mike & Denise Okuda on “These Are The Voyages” from 2005. There is a four part featurette including, “New Voices”, “Memorable Voyages”, “Final Approach” and “End of an Era”. Rounding out there extras are a few Archival Mission Logs, Outtakes Photo Gallery and an NX-01 File 10. Great way to close out a series.