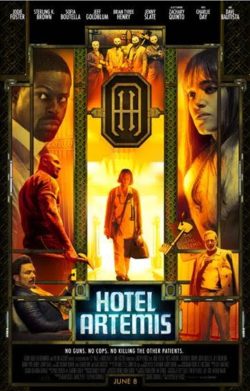 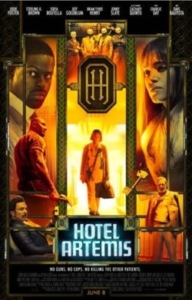 Sometimes a movie feels and looks interesting, but it isn’t. That gorgeous outer shell, sometimes in the set design or on the face of its familiar and likable characters, inherently lacks a soul. “Hotel Artemis” is a movie that wants to be loved and adored by its viewing audience. It repeatedly tells and shows the audience that it’s grimy and noir, futuristic and relevant, funny and heartfelt, but it never really proves it’s any of those things.

Jodie Foster (who’s shockingly been absent from the silver screen for five years) plays Jean, a nurse running to and fro throughout the Hotel Artemis, a safe haven for criminals in 2028 Los Angeles. She’s assisted by the bulky and intimidating, yet soft on the inside, Everest (Dave Bautista). The two-person staff somehow operates the multi-room establishment, as they patch up wounds, remove bullets, and use 3D printers to create new organs for criminals from all walks of life.

“Hotel Artemis” shrivels up in the shadow of other, much better, films that it’s seemingly ripping off of. One can’t help but think of the Continental from “John Wick” throughout much of the film’s runtime. I was also reminded of several other grindhouse, dystopian future, and sci-fi films with more developed characters and fleshed out concepts. The film takes place in one night, with the backdrop being riots throughout the city over privatized water and a company hoarding what’s left. That actually sounds more interesting than Nurse Jean’s predicaments.

“Hotel Artemis” is so busy; it manages to glide over some of its storytelling faults, but not all of them. The film lags in certain moments, like ham-fisted exposition delivery in dialogue or lingering on its own visual aesthetics. It succeeds in banter between criminals within the hospital’s confines and slowly peeling back what makes Nurse Jean tick. Even as my mind drifted away from the premise, the movie had this knack for reeling me back in.

The acting talent brought in for this movie is impressive, but they feel like they’re playing down to the material or that they’re simply miscast. Charlie Day plays an all-talk arms dealer that should be replicating his naturally funny and manic strengths, while Sterling K. Brown, who’s shown his dramatic chops on TV, seems neutered in his range for this film. However, others, like Sofia Boutella, play well to their French femme fatale role and Bautista seems at home playing Drax-lite.

Director/writer Drew Pearce, who’s worked on “Iron Man 3” and a “Mission: Impossible” movie, seems a bit incapable of bringing it altogether. Instead of stirring all the film’s themes and ideas into a cohesive vision, he mainly paints everything in messy broad strokes that’s sometimes difficult to digest and unfortunately forgettable. There are a few things that work in “Hotel Artemis,” and in much better hands, it would have been an unforgettable film.