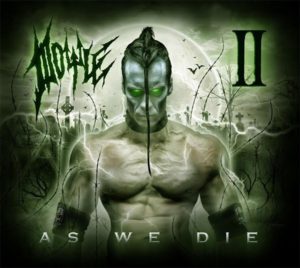 Former Misfits guitarist Doyle Wolfgang Von Frankenstein is back with a brand new full-length solo album titled II”As We Die”. The album which was initially recorded during the “Abominator” sessions will be the second release from Doyle via his Monsterman Records and once again features Cancerslug’s Alex “Wolfman” Story handling vocal duties over the course of the albums 13 macabre tracks.

Over the course of the last few years Doyle Wolfgang Von Frankenstein or Doyle for short has been on a relentless pace of record, tour and repeat. Throw in a handful of Misfit reunion shows as well and it makes you wonder when the band has had time to sleep let alone put together another full length release. II “As We Die” is the second portion of what was intended to be a double album. Originally recorded during the sessions for “Abominator”, II “As We Die” is the result of those sessions amassing an impressive amount of quality material that the band felt warranted two separate releases. I couldn’t have agreed more with the decision as where “Abominator” sets the stage, II “As We Die” solidifies the band’s sound with darker subject matter and even heavier instrumentation than its predecessor. Tracks such as “Beast Like Me” and “King of the Undead” blast out of the gate kicking and screaming with a bombastic amount of force and energy while tracks like “Darkside” and “Virgin Sacrifice” are reminiscent of Michael Graves era Misfits giving the album an eerie since of familiarity while remaining new and fresh. Though I found the guitar hooks to be less prominent this time around Doyle’s latest offering is still everything you would expect from the annihilator wielding beast.