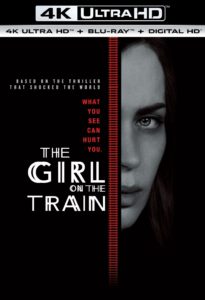 “The Girl on the Train” is the perfect film for Emily Blunt. She literally rocks this film! I could have sworn I would swear she would win awards for the role but it never really caught traction. She is truly amazing. Also Haley Bennett has a solid 2016 return with this film and “The Magnificent Seven”. The film has me staring without blinking for about 3/4 of the movie until the end reveal when it lost it almost completely. I wasn’t thrilled with the ending but overall I did enjoy the movie if not just for the performances.

Official Premise: The Girl on the Train is based on Paula Hawkins’ bestselling thriller that shocked the world. Rachel (Emily Blunt), devastated by her recent divorce, spends her daily commute fantasizing about the seemingly perfect couple who live in a house that her train passes every day. Everything changes when she sees something shocking happen there, and becomes entangled in the mystery that unfolds.

“The Girl on the Train” was released in a 4K Ultra HD combo pack with Blu-ray and Digital HD copy included. The 2160p 4K looks good but really doesn’t blow me away at all. If you compare the Blu-ray disc, I almost thought it looked better. There wasn’t anything in the 4K transfer that really stepped up the game. Not bad by ANY means just was hoping for more” The included DTS:X soundtrack (which ends up working as a 7.1 mix) sounds great and work well with the suspenseful score.

The special features are decent and worth checking out for sure if you enjoyed the film. The audio commentary features director Tate Taylor giving a lot of in-depth information on the film. There are nearly 20 minutes of Deleted and Extended Scenes included. Lastly there are two featurettes. The first is “The Women Behind The Girl” features author Paula Hawkins talking about the film. The other is “On Board The Train” looks deeper into characters and more behind-the-scenes.