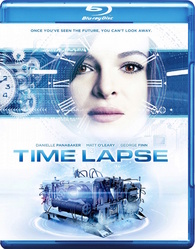 Since her role in The CW’s “The Flash” TV series, Danielle Panabaker has really hit the spotlight. “Time Lapse” is a really neat sci-fi horror thriller with a cool time travel angle twisted in. The film also has an impressive co-starring cast including: Matt O’Leary, George Finn, John Rhys-Davies, Amin Joseph, Jason Spisak, Sharon Maughan, David Figlioli and Judith Drake. Take a little bit of “The Twilight Zone” mixed with “Memento”. Worth checking out for you time travel junkies.

Official Premise: A science fiction thriller with a mind-bending premise, TIME LAPSE explores the possibilities of time travel via a camera that takes pictures 24 hours into the future. When three friends discover this mysterious machine, they conspire to use it for personal gain, until disturbing and dangerous images begin to develop and tear their relationship apart.

The Blu-ray comes with a both solid 1080p transfer and DTS-HD Master Audio 5.1 surround track. You can tell that even though this is an indie, it has some impressive production values. XLrator is known for usually deliver bare bones special features but this release has some decent extras. There is an in-depth look behind-the-scenes into the makinng of “Time Lapse”. There are two commentary tracks from the filmmakers. There is a “Nuts and Bolts” guide to how to make an indie film. Lastly there are some deleted scenes also equipped with filmmaker commentary.