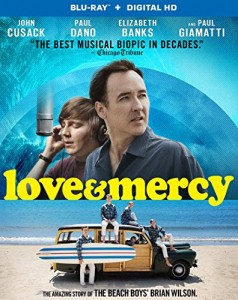 The Beach Boys are not one of my favorite bands. Let’s set the story straight here to start. When their music comes on the radio, usually I change the channel. I do though love anything that John Cusack is in. Both the acting from Cusack and Paul Dano are really sharp. Rounding out the cast include also the amazing Elizabeth Banks and Paul Giamatti. Honestly for acting alone this is worth a view. Plus “Pet Sounds” is probably one of the more easier to listen to of the bands album, since it focuses around it’s origin. If you are a hardcore Beach Boys fan, check it out for sure.

Official Premise: Love & Mercy is an unconventional portrait of Brian Wilson (portrayed by both John Cusack and Paul Dano), singer and songwriter for The Beach Boys. The film intimately examines the unique journey and ultimate salvation of this musical icon, whose success came at an extraordinary personal cost.

The Blu-ray comes with an Digital HD copy as well. The 1080p transfer is solid even though the film was shot to look old and grainy at certain times on purpose it all worked out. Of course with a film about music, the sound is very important. Well, the DTS-HD Master Audio 5.1 surround track delivers quite well. Between Atticus Ross score and clips of various Beach Boys and Wilson songs they are well represented.

In the special feature department, things are a little less interesting. There is a decent and pretty informative commentary with Bill Pohlad, the Director/Producer and Oren Moverman, the Executive Producer/Co-Writer. “A California Story: Creating the Look of Love & Mercy” looks into recreating the settings and the music for the film. “A Side/B Side: Portraying the Life of Brian Wilson” is solid and runs nearly 30 minutes with some interviews and archival footage of Wilson. Lastly there are a few deleted scenes included.