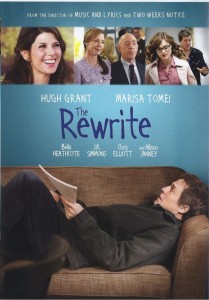 Meet Keith Michaels (Grant). 15 years ago his first screenplay won him an Oscar. Now he can’t even get a gig doing a re-write on the next “Piranha” movie. With things looking dour, his agent informs him of a University teaching gig that has opened across the country in Binghamton, New York. She tells him it will be good for him. After all, Rod Serling was from Binghamton. With no other prospects, and the power company about to shut him off, Keith heads for the “other” coast, unsure of what lies ahead.

Writer/director Lawrence has directed four films in his career. I find it no coincidence that they’ve all starred Hugh Grant. The two obviously have a chemistry together (heck, if you look at a photo of Lawrence he almost resembles Grant) and Lawrence has managed to bring out the sarcastic “best” of Grant here. Whereas a filmmaker like Richard Curtis has the ability to showcase Grant as the handsome, bumbling charmer, Lawrence allows Grant to slather on the smarm. And he slathers it on well, here.

Keith is a writing teacher who believes that writing can’t be taught. Presented with over 75 screenplay treatments to read in order to choose his students he just flips through the schools on-line student directory, choosing only pretty co-eds and nerdy undergrads. He also picks single mom Holly (Tomei), who guilts him into making her a member of the class. After feeling the wrath of the English department head (on the first day of class he tells his students to come back in one month and show him what they’ve written), he actually begins to become creative again. Whether it’s the “Star Wars” obsessed student whose scripts sound vaguely familiar (“Duke” Skywalker and his teacher, Zoda) or the young man whose script shows great promise, Keith begins to understand what true writing is about.

The cast is diverse and quite funny. Grant has done variations on this character so many times he could walk through the film but, happily, he doesn’t. The students, all with different dreams and visions, are equally strong. Simmons and Allison Janney also excel as senior department members who are unsure about Keith’s unorthodox methods. All in all, an enjoyable comedy to welcome in the spring!