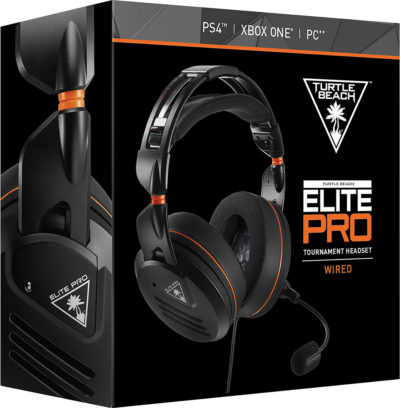 Turtle Beach is a brand that’s long been in the headset game, and they have had their fair share of competition. The Turtle Beach Elite Pro Tournament headset, as its name suggests, targets gamers who aim to play at a professional level. This Headset is uses a strong frame of metal, that encompasses most of the headset. Though the usual areas still have other parts such as the ear cup covers. But overall at first glance it seems to be a headset meant to survive consistent use.

A feature that I truly appreciated was the ability to pop off the ear cushions and with the flip of a switch cause an indent in them that’s designed to allow glasses to be worn comfortably with the headset. This actually removed pressure, where other headsets would create after long use. During gaming the headset sounds great at any rate, personally I would have like some more on the low ends but with its design offering impressive noise cancelling that helps to make its output more impressive. And the clarity of the mic paired with the TAC create clear precise audio for you and your team.

The Elite package comes with the Tactical Audio Controller (TAC) which adds even more options by using a Powered mixer. The TAC headset offers simulated 7.1 surround sound through 16 surround sound presets. If you’re an upcoming eSports star, the Elite Pro headset is slowing making its way up to the standard for audio. Now the Price tag is on the high end but a lower price would mean losing out on features. Final verdict is that with a little lower price it could be the Must-Have for the year.