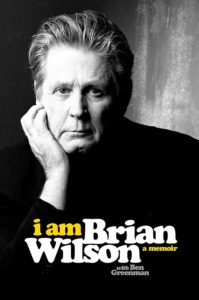 In October Da Capo press released “I Am Brian Wilson” the in-depth story of Beach Boys co-founder Brian Wilson. Together with writer Ben Greenman the enigmatic Wilson documents the poetic lyricism, inspiration and creativity behind his vast discography while at the same time showing a man who is over-time coming to terms with his past.

After reading just one chapter of “I Am Brian Wilson” I wanted more. Over the course of the books 307 pages Wilson and Greenman delve deeper than anyone has ever been as they recount the life and times of one of music’s most reclusive figures. This book is simply not a tell-all as it relates to the Beach Boys. Though that might disappoint some readers for others it will be a breath of fresh air and shine the light on a number of areas related to Wilson and his music. The writer is extremely candid about all subjects ranging to his relationships with Beach Boy members past and present, the failed and subsequent revival of the album “SMiLE” and also about his long struggle with mental illness. No stone is left unturned as the man who penned such classics as “I Get Around”, Wouldn’t It Be Nice” and “Good Vibrations” talks about some of his biggest insecurities and how he has been able to battle his internal demons during several rough patches in an effort to be able to keep doing what he loves to do.

You aren’t going to find any other story like that of Brian Wilson’s. Very rarely if ever will you find a person with Brian’s notoriety be as truthful and forth coming as he is in this book. “I Am Brian Wilson” is an emotional roller coaster for both the story teller and the reader making this one ride that is definitely worth the price of admission.