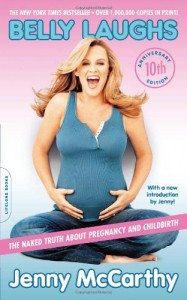 “Belly Laughs: The Naked Truth about Pregnancy and Childbirth” 10th Anniversary edition written by actress and television personality Jenny McCarthy is the former Playboy playmates first venture as an author which originally was released in 2003. The soft cover 10th Anniversary edition of the book is being released via Da Capo Press and features 166 pages jam packed with side splitting stories along with a new introduction by the outspoken author.

Now just because there is a guy reviewing this book doesn’t mean I and other fathers new to the baby game cannot relate to some of the stories contained in the reissue of this book. The cool part about the book is that it doesn’t really matter if you have 1 kid or 10 or if you’re a guy or a girl. McCarthy’s book has a little something for everyone. With the exception of a new introduction this anniversary edition the book doesn’t offer a lot of new material it’s still fun to read or for those who got the book during its initial release re-read some of the graphic yet hysterical stories Jenny chose to share. No matter how embarrassing the topic McCarthy jumps in with both feet. With chapters titles ranging from “Blue Twinkies” to “Husband No-No’s” there is no subject related to pregnancy left unturned. Jenny even pokes fun at the looming presence of “Granny Panties”. Ladies you know what I’m talking about.

Having read a number of these pregnancy themed books around the time of the birth of my son I found most of them to be pretty boring and fairly lopsided. The total opposite can be said for “Belly Laughs: The Naked Truth about Pregnancy and Childbirth” as it’s a fun quick read that both you and your significant other can enjoy.