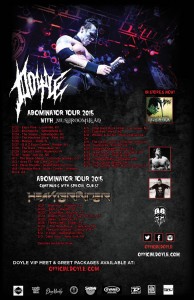 Former Misfits guitarist Doyle Wolfgang Von Frankenstein brought his band of ghouls to the legendary Lost Horizon in Syracuse, NY on May 1st as part of his Abominator 2015 Tour. Along with special guest Heavy Grinder and several local acts the night proved to be a unique and up close experience that the Syracuse crowd seemed to really enjoy.

With this date being one of the last dates on the Abominator 2015 run I was a little skeptical as you never know what condition the band will be in the longer a tour goes on. The night kicked off with several local acts performing brief sets to a small number of fans who filled the venue early on in the night. The most notable of the three bands was the Auburn, NY based Murder In Rue Morgue whose sounds was a solid blend of melodic fueled metal that held my attention throughout the bands entire set. Next up was Heavy Grinder or known to some as DJ Heavygrinder. I have to start off by saying that a DJ was not something I was expecting at this type of show however from the moment the samples of Metallica, Slayer and other notable metal heavy weights starting blasting out the speakers I was quite impressed. I did feel though that the act was a little tiring after some time and may have been better suited as in between music during set changes. The cross faded samples, and beat drops did however provide a unique and fun listening experience and one that I probably wouldn’t have found on my own.

Closing out the night was the man himself Doyle Wolfgang Von Frankenstein. In August of last year we were present for the opening night of Doyle’s first ever solo tour so this night’s performance was going to be heavily compared to that within my own mind. Right off the bat a couple things were different. Along with Doyle and vocalist Alex Story was two new additions to the group. Die Trich Thrall was filling in for Left Hand Graham on bass and Black Flag drummer Brandon Pertzborn replaced Anthony “Tiny” Biuso on the drums. The recent lineup changes only seemed to strengthen the already impressive stage performance of the band as singer Alex Story commanded the crowd’s attention while Doyle’s massive guitar sound pulverized the ear drums of everyone within the venue. The set was a great mixture of Misfits classics and songs from Doyle’s debut solo release “Abominator”. For me the highlights of the set were definitely “Skulls”, “Valley of Shadows” and “Last Caress” though all of the songs were worth mentioning.

As compared to the bands first show together back in August that I previously mentioned, this night’s show was miles ahead. The addition of Pertzborn on drums seems to be the final piece the band needed to take things to the next level both from a performance and musical stand point. Time on the road has also proved to have benefited the group as all the members appeared to key off one another which made the performance seem very cohesive and natural. Even though this leg of the Abominator tour has now come to an end I am sure it won’t be the last we see or hear from Doyle and company.