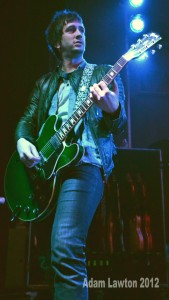 The popular multi platinum selling act All American Rejects made a stop at the Wescott Theater in Syracuse, NY on December 5th as part of their current U.S. tour. Though the venue was only about half full, each act performed as though they were playing to a sold out crowd. Syracuse’s own Pacinello opened up the show and made me instantly questions as to how they became part of the nights bill. The band consisting mostly of teenagers performed an odd assortment of covers with a few original songs throw in here and there. Though the group was not bad per say they definitely were out of their element as they were not yet at the caliber they needed to be in order to be playing where they were. It was however pretty cool to see teenagers doing what they love and I am sure the performance will definitely bolster their resume.

The Stone Foxes hailing from San Francisco, CA were up next instantly throwing the show in to high gear. The band’s sound was a mixture of indie rock and vintage rhythm and blues that was really enjoyable. Each member of the band showcased a multitude of talents by playing a number of different instruments throughout the set. From a musical stand point the bands versatility was great however, each time the members paused to change positions I felt it interrupted the flow of the set. The band played for just under an hour and left the crowd chanting “one more song” to which the members of the band seemed quite grateful. After a rather lengthy stage change the All American Rejects would finally take the stage. The band started their set off with the hit song “Dirty Little Secret” which instantly ignited the built up excitement within the venue. Lead vocalist Tyson Ritter was a ball of uncontrollable energy that moved about the stage with reckless abandonment as the band blasted though song after song pausing briefly to interact with fans. The band closed out its 70/80 minute set with the popular sing-a-long anthem “Gives You Hell” before leaving the stage for the night

It was great to see all the bands on the bill perform as though the venue was full as each one could have easily given a half hearted performance due to the minimal attendance. The bands professionalism and dedication was certainly appreciated by those who braved the cold temperatures and intermittent snowfall as each band was rewarded with strong streams of applause. An enjoyable night of music is what you will find if you are able to make it out to one of the remaining tour dates. Hardcore All American Reject fans wanting to see the band stripped down in an intimate setting will surely want to get their tickets.