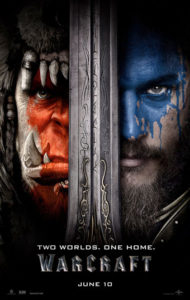 There’s a really wonderful book called, “Tales from Development Hell”. Author David Hughes summarizes the agonizing process that movies sometimes go through to get made. Some of those movies are failed passion projects, while others are ill-conceived ideas. If Hughes ever considered writing a sequel, “Warcraft” would be the most interesting chapter. I’d really like to know why this was made and given such a grotesquely huge budget.

From a financial standpoint, “Warcraft” makes sense. Over 100 million accounts have been made on the online videogame, “World of Warcraft”. That figure speaks volumes to an ignorant studio executive with no knowledgeable grasp about videogames. The failure by Hollywood to recognize the clear, and distinct, creative differences between cinema and videogames is common knowledge by now. “Warcraft” is a bore in desperate need of a skip button. It’s another lazy attempt by the studios to cash on naïve videogamers.

There are way too many names, places, and exposition to wade through, even by video game storytelling standards. Generally the gamer has to endure five to 10 minutes of information, before they get to click away at their mouse and keyboard. Their payoff is instantaneous. Of course that’s to assume that the run-of-the-mill gamer would care about the story in a point-and-click adventure. “Warcraft” on the other hand spends 20 to 30 minutes explaining things before getting to humdrum action sequences, leaving the viewer without a payoff.

The “Warcraft” movie is about the orcs making their way through a portal, to the human realm. The human realm has dwarves, elves, and probably some other generic fantasy creatures. The orcs are escaping their desolate, uninhabitable world, in hopes of staking a claim and inevitably taking over the human realm. There are a lot of sweeping scenes that imply we’re in a world much larger than the one imagined by J.R.R. Tolkien. But Tolkien’s world has actual stakes and characters we care about. “Lord of the Rings” is a fine wine that will be cherished for decades. “Warcraft” is more like a mosquito in the summertime.

The characters in “Warcraft” are unimportant. If the movie is not going to care about them, I don’t feel like I should either. Orcs are monstrous computer animated creatures, voiced by actors with nothing better to do. Their human counterparts are equally as unenthusiastic, but don’t have a CGI mask to hide behind. It’s hard to tell if they’re bored, avoiding laughter, or regretting their most recent life decision.

Have you ever been so emotionally and mentally exhausted by something that you don’t feel like explaining yourself? That’s how I feel about “Warcraft”. It’s hard for me to summarize and convey how emotionless and devoid of meaning it is, and why I loathe it so much. There are times where it slows to a crawl and feels like you accidentally hit pause on your DVR button. Then moments later it feels like it’s stuck on fast forward.

As someone who’s played the “Warcraft” games, but not enough to call myself a fan, I don’t understand the appeal of a cinematic adaptation. “Warcraft” has its head stuck in the clouds that nothing is wrong, when clearly everything is wrong. I now understand why this movie spent nearly a decade on the shelf, being passed up by acclaimed director after acclaimed director, before finally settling on Duncan Jones. “Warcraft” should have stayed in development hell. There’s no reason it should have been given life so it can drag viewers through hell.