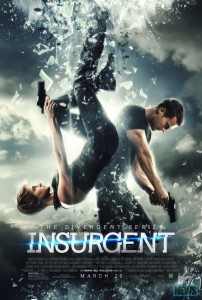 The dystopian young adult movie genre is becoming crowded as of late. The worst of the bunch were once a mere fatigue, but are now becoming a headache pounding hangover. As long as there is a cash cow to milk, we can expect more attractive heroes and heroines facing off against dull malefactors with penchants for tyranny. Some of these, like the “The Hunger Games”, are quite good. But the Divergent series appears to be an exercise in futility and “Insurgent” is the latest offering in ineptitude.

I tried as hard as I could to put the events of “Divergent” out of my mind, but unfortunately for me, there’s a lot of character exposition and annoying recounts to begin our movie. Tris (Woodley) is still the individualistic focal point of our story. She’s on the lam with her lover Four (James), and a duo of actors who make up Woodley’s on-screen romances in other films. These four are hiding out in Amity, one of the factions in the five personality-based factions inhabiting this world. Amity is this movie’s version of hippies, without the LSD, so they’re perfectly content with harmful fugitives arguing amongst themselves in their peaceful farming village.

This won’t last long because this world’s odious, self-imposed ruler, Jeanine (Winslet), is scouring the lands for them. She leads the Dauntless, the army of this dystopian wasteland. And big surprise, they’re the ones trying to find a way to control and eliminate the other factions. Of course you would know all this if you’re a fan of the series or saw the first movie. If you’re neither of these, I would like to tell you that “Cinderella” is still in theaters and a much better bang for your buck, and less harmful for your young ones.

I say that because “Insurgent” ups the violence ante with more bloodless fights, a gratuitous, yet nudeless “love” scene, and a lot of off-screen gun executions. For such a passionless movie, it doesn’t help that there’s so much soulless murder of characters. Even as an adult, and having seen my fair share of unjustifiable bloodletting in movies, watching violence without purpose in something that is attempting to cash in on the young adult crowd, feels malformed.

While the brutality adds to the directionless narrative, the acting talents of many of the stars in this movie are wasted throughout. Despite some great efforts, and dreary stares by stars like Kate Winslet and Naomi Watts, the acting gets lost in laughably bad scenes and confusing character motivations. Take for instance the fact that Jeanine wants to open a mystery box that she believes holds the key to destroying the Divergents, but it can only be opened by a Divergent. Which seems like an odd thesis on Jeanine’s part, further complicated by the fact that she operates the military and could simply just wipe out all the Divergents with countless killing machines at her disposal. Maybe I’m just overthinking that one.

At the end of the day, you know the mystery box will be opened and you know it will be Tris who ends up opening it. “Insurgent” is as predictable as it is vapid. It’s offensive to decent writing and a slap in the face to well thought out young adult movies that grow and mature. Instead of distinguishing itself, it takes some tired old clichés and believes that the casual viewer will go for mere eye candy and “heart pounding” action. Please tell the conniving studio executives you’re tired of unimaginative filth by not seeing “Insurgent”. And save me the time and anguish because someone told me there’s still a third book they can make into a movie.