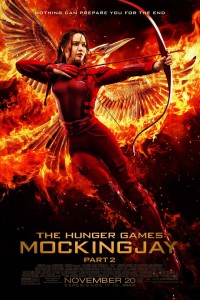 It’s a sad day for diehard fans of the “Hunger Games” series, while people like me will remember it for its long drawn-out speeches about war and the long clarifying conversations about the plot after heroine wakes up after getting knocked out. The conclusion to the much beloved series doesn’t go out with a whimper, but it doesn’t go out on a high note either. The “Hunger Games” movies will end as they started, just alright; nothing spectacular.

“Mockingjay – Part 2” picks up right after the ending events of “Mockingjay – Part 1”. Peeta (Hutcherson) has been brainwashed by the Capitol and Katniss (Lawrence) is in shock that man she once began to develop feelings for expresses hate and displeasure to the mere sight of her. Meanwhile the resistance, made of all the Districts, is planning their final assault on the Capitol. They’re led by the suspicious President Alma Coin (Julianne Moore).

Coin plans to keep Katniss safe and out of harm’s way, mainly wielding Katniss as a propaganda piece, much like Katniss was in the first “Mockingjay” movie. That doesn’t sit well with Katniss who stows away, joining soldiers on the front line as they prepare for an invasion. Her ultimate goal for this final chapter is to kill President Snow (Donald Sutherland) with her own bow and arrow.

The real fun, a block by block journey through the heart of the Capitol while alluding deadly booby traps and fighting creatures, doesn’t come until we trudge through long bits of tediously familiar dialogue. The middle of “Mockingjay” should have come sooner, or at least began the movie. Teasing the inevitable action for half an hour is disingenuous for fans and viewers of the movies, adding to the complaint that the “Mockingjay” sequel is too long. While parts of “Mockingjay” work on a superbly entertaining level, too much of it feels like unnecessary filler.

The excessive length takes away from the main theme of the movie, which is fairly basic: war is hell. For being a somewhat anti-war movie, it seems to solve a lot of its problems through violent conflict and murder. The hell aspect of that statement gives viewers some of the series best emotional scenes. The mature content of how painful and heartbreaking war can be, isn’t explored enough. Its message about how difficult the civilian toll during war can be, on either side of the battle, is sandwiched between expositions, taking away from the gut punch it should be. For a series that prides itself off its adult themes, it seems to misjudge how to present its most interesting topic in its final movie.

Overall, I’m not disappointed that I watched these movies. At times I quite enjoyed them, and I think that the series has multiple, bold adult messages directed at an audience with a young, developing mind. Like the others, I have to praise the acting throughout. It’s the best of any young adult franchise, save for the “Harry Potter” series. At the end of the day though, “Harry Potter” handled the split of its final book into two movies, incredibly well, while “Hunger Games” overcompensated for how much content they had to stretch into four hours. “Hunger Games” is another instance where the story would have been much better off as one impactful final movie than two alright flicks.